A Man And His Donkey Sing 'Circle Of Life'. Duet Will Leave You In Splits

Over 3.6 million views for this hilarious video 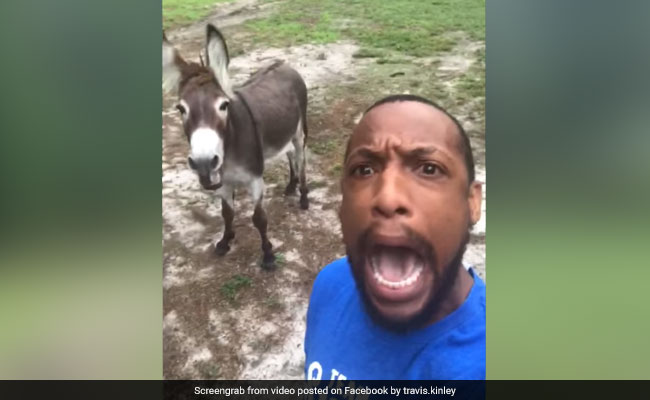 Travis Kinley shared a video of him and his donkey singing together.

A video of a man and his donkey singing together has gone viral online - and for a good reason too. It's hilarious.

One week ago, Travis Kinley, a resident of Sumter in South Carolina, shared a video that shows him belting out the 'Circle Of Life' from Disney's classic movie 'The Lion King'. As he sings, his donkey, named Nathan, joins him in braying out bits of the songs loudly - and manages to steal the show.

"I had no idea Nathan would bray," Mr Kinley said to Fox Carolina on Friday. "You can see in the video I'm actually shocked when he does it! He's brayed before, but never like that!"

Their hilarious duet has collected over 3.6 million views on Facebook alone. Take a look at it below:

The comments section of the video has been inundated with amused comments.

"Hilarious....Nathan was not about to let you get all the shine on this video. Love it!!" wrote one person. "I laughed so hard at this!! Then I watched it and laughed all over again!!" said another.

Mr Kinley told Live 5 News that the viral video started out "as a joke".

"I pulled my phone out and started recording and he started braying next to me," he said. "I think he just saw me being loud and he knows he's a loud animal and he thought we're two peas in a pod so let me be loud, too."