If they can't see me, they can't punish me, the dog seems to be thinking. 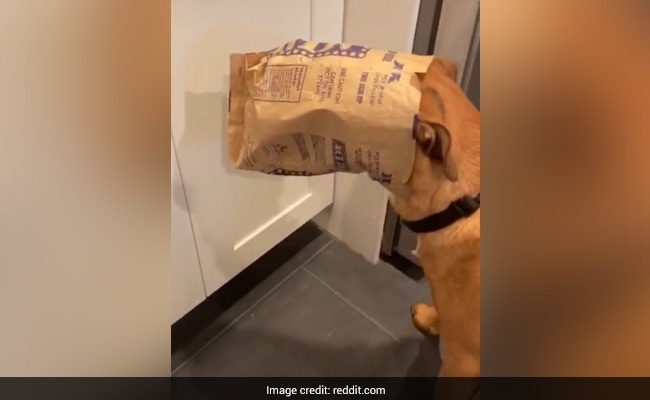 A dog steals popcorn in this hilarious video.

If Tuesday is bringing you down and you feel like watching something cute, look no further than this video of "Bear" the dog, who was caught stealing popcorn red-handed. This 'pawsitively' hilarious video shows how Bear reacted when his owner walked in on him with his head stuck inside a popcorn bag.

The video was originally uploaded on TikTok, and then made its way to Reddit where it is winning hearts.

The short clip opens with a shot of the dog with his head inside a bag of popcorn. "Bear!" says his human, walking towards him. The dog pretends to ignore him, standing completely still.

"Dog steals popcorn," reads the caption alongside the hilarious video. Watch it below:

Since being shared on Reddit, the funny dog video has been upvoted over 1,200 times, collecting a ton of amused comments.

"You can't see me therefore I'm innocent," wrote one person in the comments section.

"Seeing the bag crumple just made me giggle," said another, while a Reddit user branded the video "utterly adorable".

Some people also rushed to the dog's defense, saying that he wasn't stealing but simply wearing a mask amid the coronavirus pandemic.