A Daredevil Died Doing Pullups Off A Skyscraper In China

The 26-year-old daredevil, sometimes referred to as "Chinese Superman" had amassed a considerable following online for his adventures in "rooftopping." 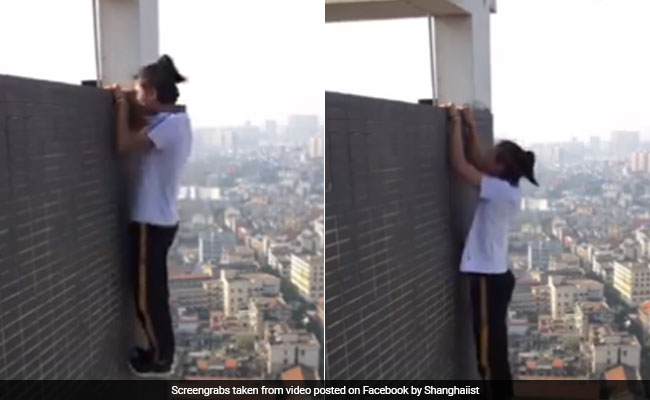 Wu Yongning's stunts were not for the faint of heart.

The 26-year-old daredevil, sometimes referred to as "Chinese Superman," had amassed a considerable following online for his adventures in "rooftopping," or scaling tall buildings without protective gear or safety harnesses.

On Weibo, a Chinese social media platform similar to Twitter, Wu posted videos of himself in the unlikeliest of places: Lying down atop a skyscraper or tiptoeing (barefoot, even) on the edge of some bridge scaffolding. Often, he had a selfie stick in hand to capture his heart-stopping escapades.

Despite the risks, Wu always survived his stunts. However, his lucky streak came to an end on Nov. 8 as he attempted to do pullups off the top of a 62-story skyscraper in Changsha, the capital of Hunan province, Chinese media outlets reported.

Video circulating of his final, ill-fated stunt shows Wu at the top of the building, appearing calm as he uses a piece of fabric to wipe down a ledge. He then swings both legs off the building and practices hanging off the edge with his elbows still bent. After about five seconds, he climbs back up and readies for another try.

On Wu's second attempt, he fully extends his hang and does three full pullups before trying to climb back atop the roof. This time, he visibly struggles to regain his footing on the side of the building.

After struggling for about 15 seconds after his last pullup, Wu loses his grip and falls from the side of the skyscraper.

Though the fatal fall took place last month, his death was not confirmed until last week, when Wu's girlfriend posted about it on social media, according to Sina.com. The Chinese news site reported that Wu had trained in martial arts and previously worked as an extra in the film industry but turned to recording his climbing stunts full time because it was more lucrative.

According to the South China Morning Post, Wu was trying to win a $15,000 prize in a rooftopping challenge - allegedly to pay for an upcoming wedding and to cover medical costs for his mother - when he fell to his death.

"Rooftopping" has gained popularity in recent years among a small but devoted subset of adventure-seekers and photographers. For some, it's an extension of urban exploration or a way to push the boundaries of photography. Others say the hobby can be thrilling and extremely profitable, according to the Guardian, which explored the phenomenon earlier this year in a piece about obtaining the "ultimate selfie."

Sometimes, it's a combination of all of the above.

But, needless to say, law enforcement agencies frown upon the practice, and several "rooftoppers" have been arrested in recent years, often charged with trespassing or public-order crimes.

"I believe that eventually somebody is going to make a mistake, and it will be a critical one," Toronto police spokesman David Hopkinson told the CBC News last year, in a push to stop the city's rooftopping enthusiasts.

In October, a 44-year-old man died after falling from the top of a Chicago hotel.

Neil Ta, a former Toronto-based "rooftopping photographer," said he was quitting the practice in a 2014 blog post titled "5 Reasons Why I'm F***ing Done With Rooftopping." In part, he blamed the onslaught of "a newer breed of rooftopper."

Promoted
Listen to the latest songs, only on JioSaavn.com
"Something fundamentally changed when it became less about just going up and having a good time with friends and more about who can take the photo of the other person in the most precarious situation," Ta wrote. "Danger sells. There was a market for our images and whoever had the most 'vertigo-inducing' photo reigned supreme. It felt too fake, too contrived."