In a few hours, hundreds of comments poured in, joking about why the alligator visited the post office in the first place 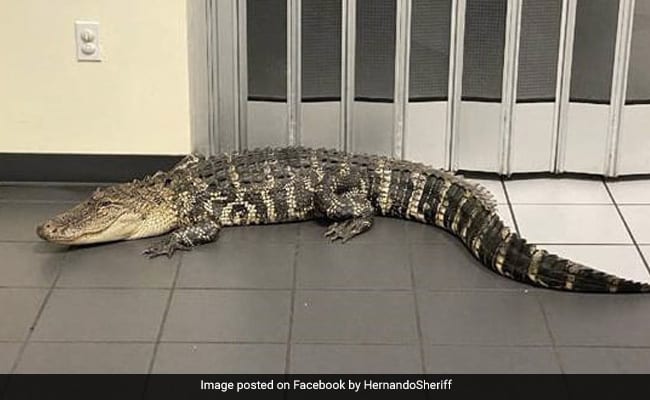 A post office in Florida received an unexpected visitor - a seven-foot-long gator.

Unexpected visitors can invoke a whole range of feelings, from joy and ecstasy to absolute fear and confusion. A patron at a US post office in Spring Hill, Florida, who was there to mail a package early in the morning, was greeted by one such unexpected visitor. Whether this unanticipated visitor invoked joy in him or mortal fear, we do not know. But we sure do know the visitor was unwelcome. How? Well, on receiving the news, someone from the Hernando County Sheriff's Office had to come to the site immediately to take our visitor away. But who is this visitor, you ask? No one special, just a seven-foot-long alligator.

According to a post on the official Facebook page of the Hernando County Sheriff's Office, the incident happened on June 9, when a patron had come to the post office to mail a package. That was when the patron bumped into our 7-foot-long reptilian friend taking a stroll in the lobby area.

The post went viral in a couple of hours, attracting nearly 3,000 likes and 4,000 shares, with hundreds of comments. Like most posts that go viral on social media, this one, too, had users finding an element of comedy to lighten the gravity of the situation.

Another user, Hailie Marie, wrote, “He's got postcards to send to family back home. Mind your business.”

In another notably cheeky comment that is sure to make you chuckle, a user, Sheli Mullen Dile, said, “Well, it is mating season, maybe he was looking for his mail-order bride?”

Another user, Katie Fenton, heaved a sigh of relief on being “late” to reach the post office. Her comment read, “I was actually going to go there this morning, but I was running late for work,” and added that it was a “good thing I was running late”.

One other user, Christopher Dyer, wondered how the alligator got inside the post office through the automatic double doors, expressing surprise and confusion in the comments section. “I'm surprised the doors opened for it. They usually sense motion from body heat, alligators are cold-blooded. It might have slipped in when the door opened for a human, I guess," read his comment.

Another user took this opportunity to crack a joke on the Florida heat. "Can you see the smile on his face? The poor creature was enjoying the AC indoors, have you been outside? Lol", their comment said.

We can't lie that we didn't enjoy the pun in a comment by a user, Steve Francis, that read: "They didn't deliver to his door so he just caiman." He saw the opportunity for a well-timed pun, he took it. For the uninitiated, Caiman is a kind of lizard, and the name has been used as a pun in place of "came in".

Have you ever received unexpected visitors like this alligator? Let us know in the comments.

Viral Video: Little Boy Greets Every Passenger He Meets While Boarding A Flight