3 Abandoned Tiger Cubs Have Finally Been Adopted - By A Dog. Watch The Video 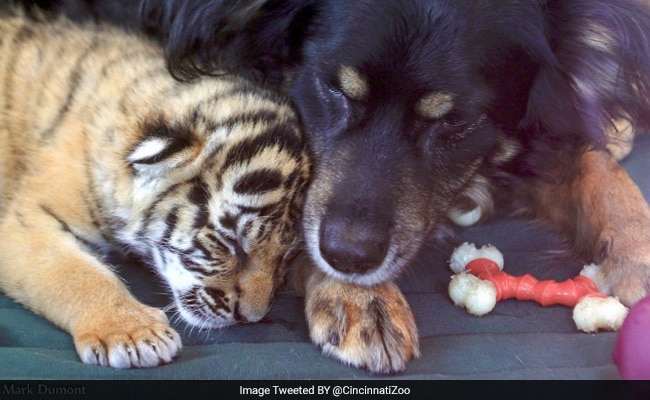 After being rejected by their birth mother, three tiger cubs are being cared for by a dog

Cincinnati, Ohio: The Internet is obsessed with unlikely animal pairs, so it's no surprise that the news of a dog adopting three abandoned tiger cubs is going viral. After being rejected by their birth mother, three rare Malayan tiger cubs were being cared for by the staff at the Cincinnati Zoo. The cubs, born on February 3, 2017, are now having the time of their lives with their adoptive father - a 6-year-old Australian shepherd dog named Blakely. The furry, four-legged creature is the Cincinnati Zoo's resident nursery companion. Zoo officials say his baby-rearing resume includes experience with cheetahs, wallabies, skunks, and even bat-eared foxes.

The zoo explains that during supervised visits, Blakely provides snuggling, comfort and a body for the cubs to climb. The cubs would have received similar cues from their mother. Since being with her is not an option, Blakely is the next best thing.

The cubs, all females, are named "Chira" (because she was treated by a chiropractor), "Batari" (which means goddess) and "Izzy" (which means promised by God).

"He's more than just a large, warm pillow for the cubs. Blakely is the adult in the room. He teaches them proper tiger etiquette by checking them when they're getting too rough or aggressive," says Dawn Strasser, head of Cincinnati Zoo's nursery staff. "This is something that their human surrogates can't do."

"Just a little time with him at this early age will help them learn behaviours that will come in handy when they meet tigers at other zoos in the future," she explains.

Watch how Blakely helps take care of the 3 tiger cubs:

Since 2016, the city of Cincinnati celebrates October 19 as Blakely Day in honour of the sweet dog's nurturing nature.