The once-in-a-lifetime experience is the brainchild of Janne Honkanen, founder and CEO of Luxury Action, a high-end travel company specializing in arctic excursions 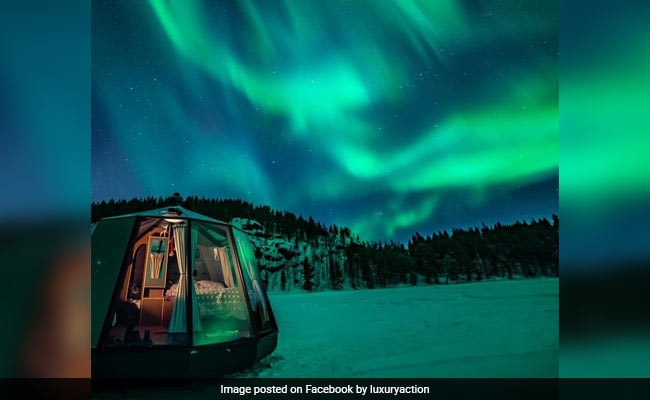 Guests at the North Pole Igloos will stay in one of 10 heated, glass-walled igloos at night

It's a travel experience so unique, it only takes place one month every year - but for who knows how long.

A Finnish luxury travel company is set to open a movable hotel at the North Pole that offers a rare and eco-conscious experience for the adventurous traveler who can swing the roughly $100,000 price tag for up to five nights' stay. The North Pole Igloos are slated to welcome its first guests in 2020 and will operate yearly every April.

The once-in-a-lifetime experience is the brainchild of Janne Honkanen, founder and CEO of Luxury Action, a high-end travel company specializing in arctic excursions. Honkanen said guests at the company's luxury wilderness lodge in the Finnish Lapland region were increasingly interested in knowing more about nature in the Arctic, which prompted the creation of the North Pole experience.

"I thought that this is the time and the opportunity to give a chance for my guests to experience the North Pole with arctic explorers and scientists in a safe way," Honkanen wrote.

Guests at the North Pole Igloos will stay in one of 10 heated, glass-walled igloos at night, where they can gaze at the stars, and probably the Northern Lights, through glass ceilings. During the day, travelers will sight-see around a glacier, meet indigenous people who live in the polar regions and arctic scientists working nearby, and hopefully catch sightings of seals, polar bears, arctic birds and other wildlife, Honkanen said.

Ted Scambos, a senior research scientist with the Earth Science and Observation Center at the University of Colorado, Boulder, said travelers in April can expect "dim and twilight-y" daylight hours in the North Pole, where the sun is very low in the sky and temperatures range from minus-20 to minus-40.

"It's not for the fainthearted," Scambos said.

He noted that the experience is limited to the month of April before the North Pole's most "hard core" weather, but before the summer melt sets in. The three- to five-night excursion (depending on weather) begins in Svalbard, a group of Norwegian islands in the Arctic Ocean, with only one night spent at the North Pole itself.

"In April it's really safe and nice to travel; [otherwise] we're speaking about extreme conditions," Honkanen told The Washington Post by phone from Finland. The complex conditions, remoteness and short window for viable travel make the pole "the most exclusive travel destination on the planet."

He compared the scenery from the North Pole's frozen ice floe in the middle of the Arctic as one most people only see from the sky: "It's like looking out an airplane window and floating on the clouds with the baby blue sky around you."

The package includes air travel from the Lapland region to the North Pole, a camp manager, arctic wilderness guide, chef services, security and even thermal clothing.

Honkanen doesn't see the ambitious plan as just another creative way to help the ultrawealthy unburden themselves of 100 grand. With two decades in the business of creating experiences like a $110,000 Nordic-themed "arctic safari," he said he worries that "nowadays, luxury travel sometimes loses meaning." He wants the travel to mean something.

His goal is to introduce travelers to the Arctic's rare ecosystem and get them to evaluate their own role in climate change - and hopefully, spread the message to others.

"I want to connect each guest with the local culture, the local people, surrounding nature and the wildlife," Honkanen said. "But I [also] want to spread the word of the situation that's happening in the arctic. Since we live up north, we see and feel how it affects our environment."

He noted that climate change is already having an impact on the fragile arctic ecosystem by affecting the food chain, wildlife and groups such as reindeer herders and arctic fishermen whose livelihoods rely on the relative stability of the local environment.

"I'm really worried about the climate crisis on the planet," he said. "Because of climate change, we don't know how many trips we can do up there. The North Pole is a glacier."

He said previous clients who've traveled with his company have kept in touch to report taking on new recycling habits, planting trees and finding ways to offset their carbon footprint created from habits like flying private.

Honkanen said the North Pole excursion is sustainable and mindful of not hurting the arctic environment.

"We have to think about the environment and nature and having a minimum footprint. Everything we bring out, we bring back with us," he said, even the exotic glass igloos.

Scambos, the arctic researcher, said travel to the North Pole is hardly carbon-neutral; from Finland, it's another plane ride and a helicopter ride to reach the site.

"Unless they do a lot of carbon offsetting, they just have to accept the fact that they have to spend some carbon to give people this experience," Scambos said. Still, it could be well worth it, he said.

"I think it would change peoples' minds on how hard we need to work to change how we interact with our planet," he said. "I think it's a good thing to give people that exposure. The environmental impact is small compared to the impact of a changed mind."

According to Scambos, the real limitation of this particular excursion is that it's too short.

"In April, you're only going to see a small window of how arctic climate is evolving, how thin the Arctic Sea ice is. In the summer - that's when you'd be faced with the stark reality that this ice can't survive [rising temperatures]."