Mumbai's civic body had decided to clear the cutting of 2,700 trees at Aarey Colony for an upcoming Metro Car shed. 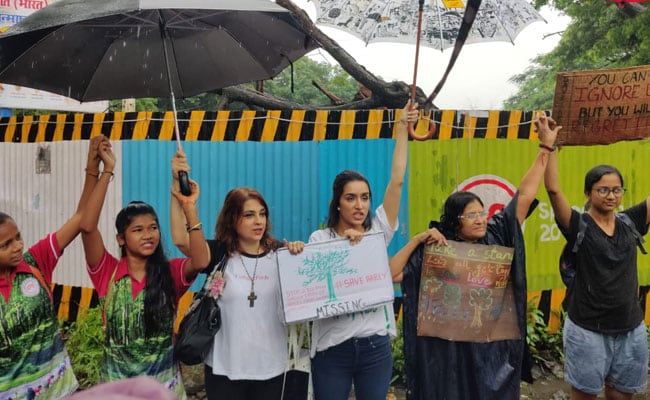 The decision to cut the trees had sparked massive protests in Mumbai.

Mumbai civic body chief Praveen Pardeshi today defended the decision to cut over 2600 trees to build a metro car shed in the suburban Aarey Colony, a prominent green lung in the metropolis , saying that it has more trees than London, Tokyo or New York.

Speaking at an event at a university in Mumbai, Mr Pardeshi also brushed aside suggestions by activists to shift the proposed car shed to another area, arguing that the cost of acquiring and developing this plot was very high.

He went on to say that "collective pressure" of a section of people was holding back metro plans.

"Mumbai has the least space to develop at present. All of Mumbai lives in 29.99 per cent area. Whatever is happening in metro today is your collective pressure," Mr Pardeshi said.

While activists have routinely contended that infrastructure development by cutting trees and gobbling up open spaces was leading to floods in the city, Mr Pardeshi retorted, "Is the car depot (at Aarey) up already? If not, then why have there been floods?"

Defending the plan to cut trees for the car shed, the BMC chief said, "Mumbai has a higher number of trees compared to other cities, be it London, Tokyo or New York."

Activist Stalin D, however, alleged that the civic and state government authorities had changed Aarey land reservations to suit themselves.

"Aarey is a no development zone but the state government changed the reservation to suit them," he alleged, adding that more projects like an RTO vehicle testing track and zoo were proposed in the area.

Incidentally, while hearing a bunch of petitions on the cutting of trees for the metro car shed, a bench comprising Chief Justice Pradeep Nandrajog and Justice Bharati Dangre of the Bombay High Court said there was need to "contrast and compare" environment and development as both are required.

"We need both environment and development. Hence, we need to contrast and compare the two. The world over, scientists and ecologists are researching the issue of how to value environmental loss," Chief Justice Nandrajog said.

"Can monetary value be placed on environmentaldegradation? What is the economical value to environmental loss? We need to see that," the court said.