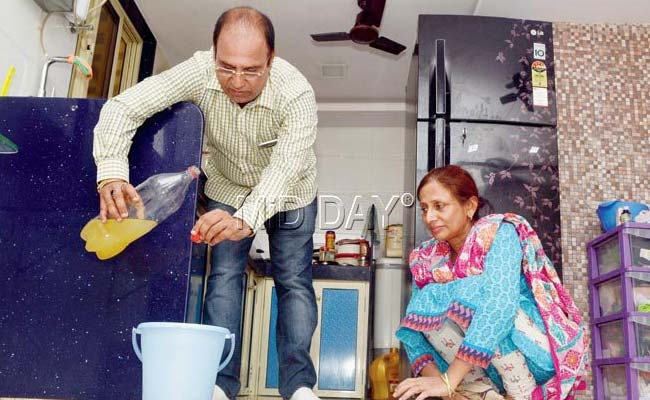 Mumbai: Congress corporator Parminder Bhamra owes his good health to cows - not just for the nourishing milk, but also the 'germ-killing' urine that has been used to clean his home all his life. And now, if he has his way, hospitals across Mumbai could soon be sanitised using cow urine.

"Gomutra has been used for this purpose since ages. I use it at home every day. It kills germs and is easily available; I get it from the nearby gaushala (cattle shed). I am sure even hospitals can be cleaned properly using it," said Bhamra.

The corporator from Malad has put forward a proposal in the Brihanmumbai Municipal Corporation, seeking that both public and private hospitals be cleaned with cow urine.

Hospitalspeak
On the other hand, top BMC health officials sounded unsure about using gomutra for hospital hygiene but tiptoed around the subject like a sacred cow.

Dr Avinash Supe, dean of KEM Hospital, one of Mumbai's largest medical facilities said, "I am not aware of this particular proposal or who suggested it. I'll have to check the effectiveness of the same before commenting."

"Gomutra has been used by individuals for cleaning since ancient times, according to ayurveda. But I am not sure about its usage in hospitals," said Dr Mahendra Wadiwal, in-charge of BMC's peripheral hospitals.

Experts say no
However, Dr V L Deopurkar, former director (Research) Nagpur Veterinary College and associate dean of Bombay Veterinary College minced no words on the topic: "Gomutra will never be accepted as a cleaning agent because of want of scientific data on it. Unfortunately in our country, many politicians are uneducated. Gomutra is used for agriculture purposes, but never for cleaning."

Even at the Go Vigyan Anusandhan Kendra (GVAK), which has been researching the properties and uses of cow urine for close to two decades, experts did not seem keen on its application in sanitation of hospitals.

"Gomutra has anti-fungal, antibiotic and anti-oxidant properties, along with disinfectant elements. We have 300 plus patents in 40 plus countries of various products made from gomutra, but we neither manufacture nor do we promote it as a disinfectant. We think that gomutra should be used for more essential purposes such as farming and medicinal benefits to people and animals. Whatever is left over can be used for cleaning," said Sunil Mansinghka, coordinator at the Nagpur-based GVAK, who is also a former member of the government's National Cattle Commission.

Up for vote
Bhamra's proposal is marked on the agenda for the BMC general meeting on November 3, and has already received the backing of his party, which holds 55 seats in the house. It's hardly surprising that the BJP (with 30 seats) has also expressed support, considering the party's ideology and past comments by BJP leaders (see 'Cancer cure'). The Shiv Sena is also expected to get behind the proposal, adding its own strength of 70 seats.

When it was pointed out that it is usually saffron parties that push for the use of cow urine, Bhamra responded, "Congress is the oldest party; we have been around for a long time and it is our ideas that are followed by everyone else. My idea has been supported by my party and I am sure it will be passed in the house."

'Cancer cure'
In March, cow urine was touted as a cure for cancer in the Rajya Sabha by BJP member Shankarbhai N, who had said, "If you want to save yourself from cancer, there is a need to protect cows on a priority because cow urine is effective in curing cancer completely. It can cure cent per cent. I can vouch for it."