Thane: Frustrated At Being Called Gay, Teen Jumps Off Skywalk 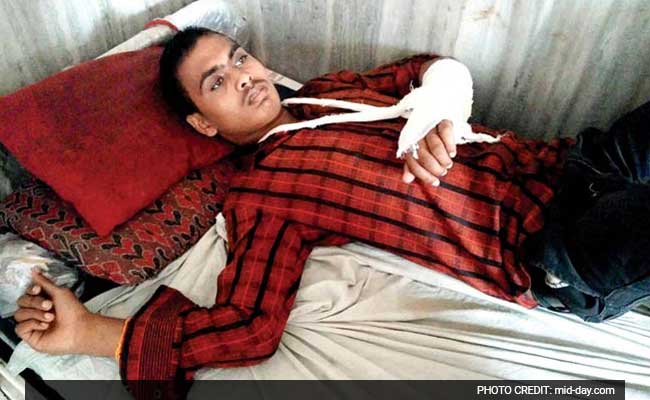 Bhushan Mundokar recuperating at the civic-run Central Hospital in Ulhasnagar.

Mumbai: Frustrated at being called a 'baylya', Marathi slander for gay, a 17-year-old boy tried committing suicide by jumping off a 40-ft high skywalk in Ulhasnagar on Wednesday.

Thankfully, Bhushan Bhimrao Mundokar survived the fall and only fractured his left arm. He is currently recuperating at the civic-run Central Hospital in Ulhasnagar.

A student of FYJC (Commerce) at SST College in Ulhasnagar-4, Bhushan resides with his father, mother and elder brother at Hanuman Nagar in Ulhasnagar-2. The Mundokars had shifted from Akola to Ulhasnagar about five years ago.

Speaking to mid-day, Bhushan said, "My classmates have been teasing me 'baylya' for the last two months, but I would ignore them. I rarely made friends thinking that even they would start mocking me. My college starts at 11.30 am and mostly ends by 3 pm, after which I return home. On Wednesday, I left home at 11 am as usual and took the skywalk to crossover to the eastside to take an auto for college. While walking on the skywalk, I suddenly remembered the insults I was being subjected to on a daily-basis. Though I contemplated on retaliation, I feared the backlash. In the past, they had ganged up and thrashed me. The next thing I remember after regaining consciousness is that I was on a hospital bed with a fractured arm."

An aspiring CA, Bhushan added that he is scared to go back to the college and will miss out on a year as the final exam starts today because he won't be able to appear due to his injury.

Parent speak
Bhimrao, a plumber by profession, said it were the passersby who noticed Bhushan lying unconscious below the skywalk and rushed him to the hospital. "One of them managed to secure my elder son's number from Bhushan's phone and informed Ashish about the mishap. He then called and asked me to meet him at the hospital," he added.

Doc speak
Vijay Kalbande, additional civil surgeon, Central Hospital, said, "Besides treating him for a fractured arm, the boy is being counselled by experts. There is a possibility that he took the drastic step due to the ongoing emotional turmoil within him. Counselling programmes should become a part of our school and college syllabus, so that kids don't take extreme steps at a tender age."

Different viewpoint
Speaking to mid-day, JC Purswani, SST College principal, offered a different version of the incident. He said, "I personally visited the boy in the hospital. With the finals starting on Friday, the student and his parents were extremely tense. I told them to submit a medical certificate so that the boy can appear for exams during the next round."

When asked about the action he would be initiating against the boys Bhushan has accused of harassing him, Purswani said, "I personally feel that Bhushan was extremely nervous with the upcoming exams, as he hadn't prepared well. I have suggested his parents to visit the college once he recovers so that we could ascertain the exact reason behind him taking the drastic step."