After his flight to Mumbai was diverted to Nagpur, actor Randeep Hooda tweeted a photo of him and his uncles, saying they've planned a trip to the Tadoba Andhari Tiger Reserve. 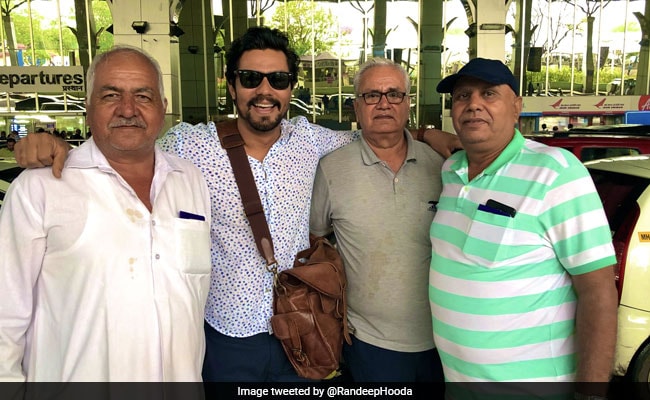 Mumbai rains: The flight in which Randeep Hooda and his uncles were travelling was diverted to Nagpur.

Actor Randeep Hooda was among hundreds of passengers who were affected as several Mumbai-bound were diverted as the city was pounded by rain.

The actor, who was travelling with this three uncles, boarded a flight from Delhi to Mumbai last night. But after a SpiceJet plane overshot the runway while landing in Mumbai, the authorities were forced to shutdown the main runway, leading to diversion of a number of Mumbai-bound flights.

Randeep Hooda called it a "strange night" after his flight was diverted to Nagpur. He said it was turning out "quite an adventure for sure". The actor's uncles were first-time flyers, he tweeted at 3:50 am.

Flight from Delhi to Mumbai diverted to Nagpur .. sitting in the plane with no where to go .. a first time for such a strange night .. and I have first timers traveling with me.. turning out to be quiet an adventure .. a very inconvenient ride for sure #MumbaiRainsLiveUpdates

Hours later, he tweeted a photo of them at the Nagpur airport, saying they've planned a trip to the Tadoba Andhari Tiger Reserve.

So the Hooda boys never made it Bombay..diversion to Nagpur so when in Nagpur one must head to Tadoba Andhari Tiger Reserve Buffer Zone..the trip to Bombay has become a trip to the greater Maharashtra region.look for the best in every situation #MumbaiRainsLiveUpdates#MumbaiRainpic.twitter.com/Ol5wsJzVHz

Eighteen people were killed as heavy rain pounded Mumbai and its surrounding areas  on Tuesday, flooding the airport and paralysing local trains, the lifeline of India's commercial capital. 52 flights have been cancelled and 55 diverted because of bad weather and the skidding of the SpiceJet plane, forcing a shutdown of the main runway at the airport. The Chhatrapati Shivaji Maharaj International Airport officials said it may take up to 48 hours before the main runway is restored. A secondary runway is operational for flights.