Mumbai: The video, widely shared on social media, shows him sipping an energy drink, sitting on the edge of the 22nd floor of a building in the western suburb of Kandivali. 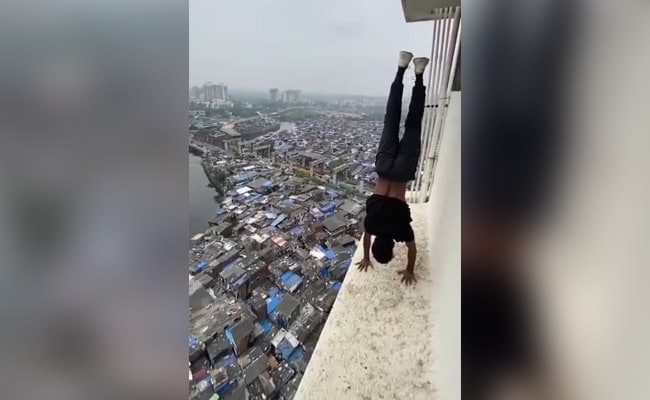 Mumbai Police has registered a case against Noman D'Souza and two of his friends.

A young man, who was seen in a viral video performing dangerous stunts on the narrow ledge of a Mumbai high-rise, has been arrested. The video of the stunts on the 22nd floor of the building had come to the notice of the police.

The man who did a handstand as his associates filmed the stunt has been identified as Noman D'Souza.

The video, widely shared on social media, shows him sipping an energy drink, sitting on the edge of the 22nd floor of Bharat SRA building in the western suburb of Kandivali. He then jumps on to the ledge next to it, barely two feet in width, and performs handstand as his associates film the stunt.

While the man performs the stunts, another person is seen either shooting the video or taking a photograph, which was later uploaded on Instagram, the police said.

Mumbai Police has registered a case against Mr D'Souza and two of his friends.

Scores of people die globally every year while attempting to take selfies and videos to get instant fame on social media. In 2018, a man was hit by a train in Hyderabad as he was trying to take a selfie right next to railway tracks.