"Disappointed," Say Twitter Users After Another Bridge Collapse In Mumbai

Mumbai Bridge Collapse: Eyewitnesses also asked why the bridge was not closed amid the ongoing repair work. 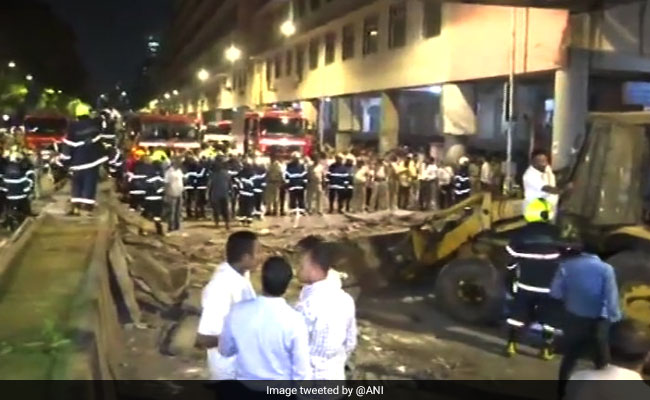 Mumbai bridge collapse: A safety audit was carried out on the bridge six months ago.

Six people were killed and at least 33 were injured when a foot overbridge near the Chhatrapati Shivaji Maharaj Terminus (CSMT) railway station in Mumbai collapsed on Thursday evening.

"Foot over bridge connecting CST platform 1 north end with B T Lane near Times of India building has collapsed," the Mumbai Police tweeted minutes after the collapse.

The injured people were taken to the St George's Hospital and GT Hospital. Two women killed in the incident worked at the GT hospital.

The latest incident, which comes months after bridge collapse in Andheri, has yet again raised concern among the locals prompting them to question the authorities.

Reactions poured in on Twitter, as users shared pictures of the incident.

Some of them questioned the civic body, the Brihanmumbai Municipal Corporation, and Central Railways over poor infrastructure.

Bridge outside BMC head office collapsed. So lethargic in their work that they couldn't inspect things in their vicinity inspite of having a huge budget out of our tax. #BMC#shivsena#Mumbai#BJP#accident#Retweet#CSMT

Eyewitnesses also asked why the bridge was not closed amid the ongoing repair work.

Very sad news. Painting and flooring is only eyewash. #CSMT

If all debris of this bridge has been picked up and dumped in Garbage truck, all evidence of bad construction material is wiped out. What will BMC and authorities investigate?. @fayedsouza#MumbaiBridgeCollapse#CSMT#CSMTBridgeCollapse#Mumbai#MumbaiFOBCollapse

THE FOB RIGHT BEHIND THE BMC HEADQUARTERS COLLAPSED 20-25 PEOPLE INJURED &
SOME REPORTED DEAD????. BMC FAILS TO MAINTAIN THE AREA AROUND ITS HEADQUARTERS . YOU CAN IMAGINE HOW THEY MUST BE MAINTAINING THE CITY. #CST#CSMT

This is not done and fair you pay heavy taxes and u expect atleast basic infrastructure and amenities but regardless u end up in debris...irony of Indian citizen and voter ???? #MumbaiBridgeCollapse#cststation#CSMT

A safety audit was ordered after another foot overbridge had collapsed last year in Andheri. 445 such bridges had to be assessed in a safety audit after last July's Andheri bridge collapse. Maharashtra Chief Minister Devendra Fadnavis has said a safety audit was carried out on this bridge six months ago.

The bridge near  the Chhatrapati Shivaji Terminus - a UNESO heritage site - was built in 1984.