The collapse at one of the busiest stations in Mumbai took place during peak hours, when there was a lot of rush on the overbridge. Six people were killed and 33 injured as a portion of a foot overbridge near the Chhatrapati Shivaji Maharaj Terminus (CSMT) railway station in Mumbai collapsed on Thursday evening.

The collapse at one of the busiest stations in Mumbai took place during peak hours, when there was a lot of rush on the overbridge. The injured people were taken to the St George's Hospital and GT Hospital. Two women killed in the incident worked at the GT hospital.

The pedestrian bridge connects the railway station to the Azad Maidan police station and the Times of India building in south Mumbai. Traffic on the stretch has been affected and commuters have been advised to use alternate routes, police said.

The accident comes almost two years after 23 people died in a crush on a narrow overcrowded footbridge at Prabhadevi station in the centre of the city in September 2017.

Here are the LIVE Updates of the Mumbai Foot Overbridge Collapse:

Mar 14, 2019 23:49 (IST)
Yuva Sena leader Aaditya Thackeray says CSMT bridge collapse 'extremely disturbing'.
Today's tragedy is extremely disturbing. Although there shan't be any blame game, there will be reasons found & responsibility that will be fixed. A recent audit also apparently happened. That audit shall be revisited to examine what wasn't mentioned or followed.
Mar 14, 2019 23:11 (IST)
I pray for the speedy recovery of the injured, says Delhi chief minister Arvind Kejriwal
"Prayers with the families of victims. Hope there is no further loss of lives. All our volunteers should immediately help in relief and rescue operations."
Mar 14, 2019 23:01 (IST)
"Shocked to hear about the tragedy in which many people lost their Iives due to Footover Bridge collapse at CSMT. Praying for the speedy recovery of all those who are injured. Demand strong action against those responsible for such negligent administration which cost human lives," tweeted State Congress Chief Ashok Chavan.
Mar 14, 2019 22:54 (IST)
READ| CST Foot Overbridge Collapse Is Mumbai's Third In 2 Years 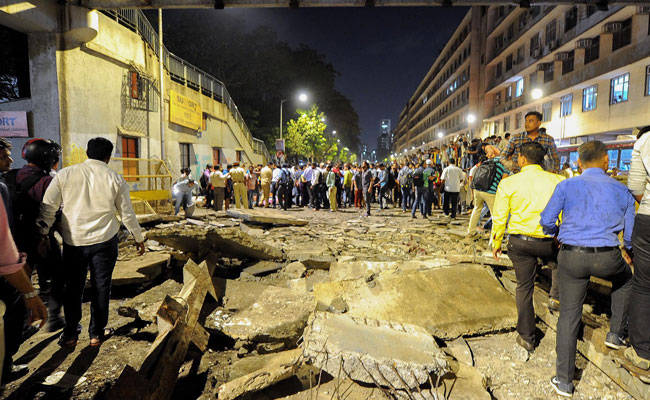 Mar 14, 2019 22:51 (IST)
Congress chief spokesperson Randeep Surjewala said he was deeply saddened to learn about the Mumbai bridge collapse where several people are still reportedly trapped under the debris.

Rly Min, Piyush Goyal must resign or be sacked.
2/2

Mar 14, 2019 22:50 (IST)
CPI(M) general secretary Sitaram Yechury on Mumbai Bridge Collapse tweeted saying, "Of course. Exactly like puppies are responsible for coming under the tyres of a car. This statement accurately reflects the chal, charitra, chehra and chintan of the BJP."
Mar 14, 2019 22:37 (IST)
Former Congress MP Priya Dutt expressed condolences over the incident.

Shocking that the cst foot over bridge which was supposedly audited 6 months back has collapsed, It's sad that we still cannot provide safe infrastructure for our hardworking people of Mumbai. In grief, I pray for the victims and their families.

Mar 14, 2019 22:35 (IST)
"My thoughts and prayers are with all those who have lost their loved ones in the tragic bridge collapse in Mumbai today. I wish the injured a speedy and complete recovery," tweeted Samajwadi Party chief Akhilesh Yadav.
Mar 14, 2019 22:28 (IST)
Home Minister Rajnath Singh expressed grief for those impacted in the collapse. He said, "The collapse of a foot Overbridge in Mumbai is deeply saddening. My thoughts are with the families who lost their loved ones in this accident. I pray for the speedy recovery of the injured."

Distressed at the news of the fall of part of the overbridge at CST. Praying for the injured.
Commuter safety needs attention and hoping that authorities act to prevent such incidents.

Mar 14, 2019 21:58 (IST)
Maharashtra chief minister Devendra Fadnavis said, "A safety audit was carried out on this bridge 6 months ago and minor repairs were made on foot overbridge that collapsed in Mumbai today."
"An ex-gratia of Rs 5 lakh each will be given to the families of those who died in the incident and compensation of Rs 50,000 each will be given to the injured. The state govt will provide for their treatment," says Fadnavis.
Mar 14, 2019 21:52 (IST)
READ| 5 Dead, 29 Hurt As Foot Overbridge Collapses Near Mumbai's CST: 10 Points 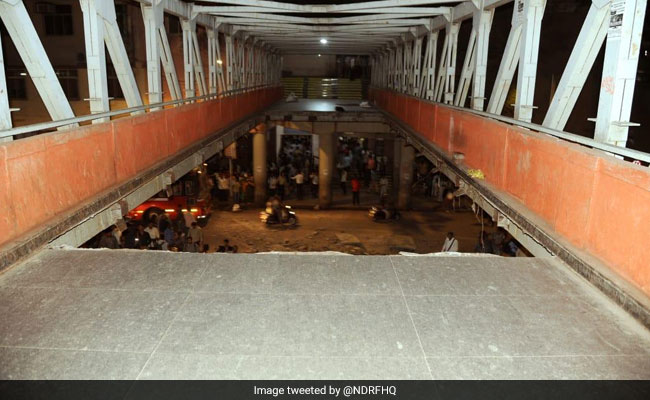 Mar 14, 2019 21:43 (IST)
Prime Minister Narendra Modi tweets on the Mumbai footover bridge collapse.
Deeply anguished by the loss of lives due to the foot overbridge accident in Mumbai. My thoughts are with the bereaved families. Wishing that the injured recover at the earliest. The Maharashtra Government is providing all possible assistance to those affected.
Mar 14, 2019 21:30 (IST)
"We are deeply saddened by the news of the #MumbaiBridgeCollapse, our thoughts & prayers are with the families of those who lost their lives & we wish the injured a speedy recovery. We urge all Congress workers to help in any way they can," the Congress tweeted.
Mar 14, 2019 21:19 (IST)
The National Disaster Response Force or NDRF initially said 10 to 12 people were feared trapped under the debris but police later clarified that was not the case.
Mar 14, 2019 21:16 (IST)
Maharashtra Chief Minister Devendra Fadnavis tweeted on the unfortunate incident that took place near CSMT station in south Mumbai earlier this evening.

Pained to hear about the FOB incident near TOI building in Mumbai.
Spoke to BMC Commissioner and @MumbaiPolice officials and instructed to ensure speedy relief efforts in coordination with @RailMinIndia officials.

Mar 14, 2019 20:50 (IST)
Eyewitnesses said repairs were being carried out on the overbridge this morning, but it was still being used. The collapse at one of the busiest stations in Mumbai took place during peak hours, when there was a lot of rush on the overbridge.
Mar 14, 2019 20:42 (IST)
Visuals of the footover bridge collapse outside CST Railway station in south Mumbai. 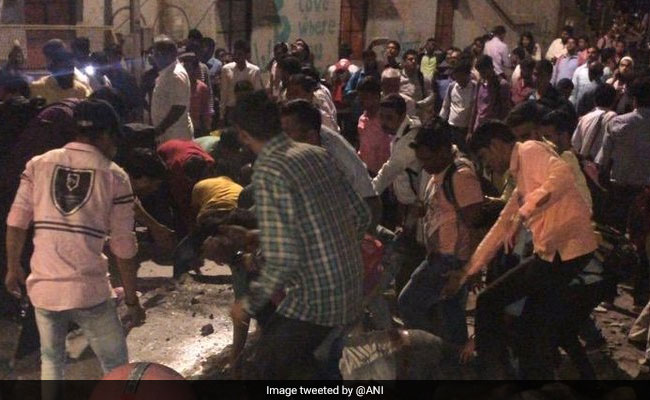 Mar 14, 2019 20:24 (IST)
The rescue and relief teams have removed the debris and all the injured have been taken to GT Hospital.
Mar 14, 2019 20:19 (IST)
The CSMT bridge was not part of a safety audit ordered after another foot overbridge had collapsed last year in Andheri. 445 such bridges had to be assessed in a safety audit after last July's Andheri bridge collapse. The 40-year-old bridge at the Andheri station had crumpled after heavy rain. Railway Minister Piyush Goyal had then said the Andheri bridge, built in 1971, had a "design flaw".
Mar 14, 2019 20:14 (IST)
Amitesh Kumar, Joint Commissioner of Police, Traffic, told NDTV over the phone said, "We are trying to decongest the area so as to ensure easy movement of ambulances.That's all i can say right now"
Mar 14, 2019 20:08 (IST)
Footover bridge connecting CST platform 1 north end with B T Lane collapsed. Traffic affected in the area, Mumbai police tweeted.

Foot over bridge connecting CST platform 1 north end with B T Lane near Times of India building has collapsed. Injured persons are being shifted to hospitals. Traffic affected. Commuters to use alternate routes. Senior officers are on spot.