Maharashtra farmers' march is being led by the Left-affiliated All India Kisan Sabha (AIKS) and the farmers plan to gherao the Vidhan Sabha tomorrow.

Mumbai: After walking with blistered feet for about 180 km in the blazing sun over the last six days, at least 35,000 farmers from Maharashtra's Nashik district have entered the capital city. They camped at the Thane-Mumbai border this morning before heading for the KJ Somaiya Ground in Sion. The traffic police say they are prepared and have also issued a traffic advisory to avoid jams in the city. Elaborate security arrangements are also in place, police said.

The farmer contingent, including tribal cultivators, led by the Left-affiliated All India Kisan Sabha (AIKS), plans to gherao the Vidhan Sabha tomorrow to press their demands for complete loan waiver and transfer of adivasi land to farmers who have been tilling it for years. The adivasis, who have joined the movement in huge numbers, say it is a matter of life and death.

Ashok Dhawle, president of the AIKS, said they met Maharashtra minister Girish Mahajan today who had assured them that he would take their demands to Chief Minister Devendra Fadnavis. Shiv Sena leader Aditya Thackeray met with the farmers today.

Mr Dhawle has also promised a peaceful protest and said that people of Mumbai will not be inconvenienced. "We started with 25,000 and today our strength touched the 50,000 mark. It will swell further tomorrow, but it will not disturb the city. We will begin our rally after 11 am so that students appearing for their Class 10 board exam don't face any difficulties," Mr Dhawle said.

The farmers began their arduous march on Tuesday evening. Their numbers swelled along the way. They survived on sparse meals, made brief halts and slept under the open sky. They resumed their march before the sun was up and didn't stop before noon.

Jidabai Gaikwad, one of the protesters, who marched consistently for four days and encouraged others not to give up, showed off her blisters and told NDTV, "I want to tell the Chief Minister that he should transfer the land in our names so that we can work and feed ourselves."

Ajit Nawale, state general secretary of AIKS, said their main demand is for a complete loan waiver and the implementation of the Swaminathan Committee report, which says farmers should be paid one-and-a-half times the cost of production for what they produce and the MSP's should be fixed keeping this in mind. 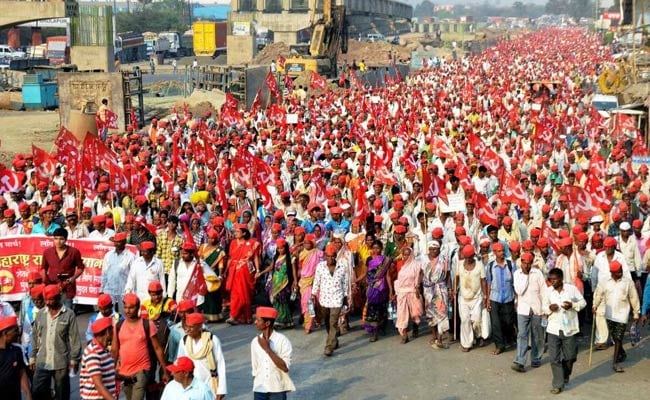 Farmers began their 180-km walk from Nashik on Tuesday.

As the march continued towards Mumbai under thousands of red flags fluttering in the air, the organisers insisted it could not be branded a communist protest as it was for a common cause and not confined to the Left alone.

Promoted
Listen to the latest songs, only on JioSaavn.com
Senior Shiv Sena leader Eknath Shinde visited the protesters late Friday night, but clarified that he had come with party chief Uddhav Thackeray's message and not as a minister in the Maharashtra government. The Nationalist Congress Party and the Raj Thackeray-led Maharashtra Navnirman Sena have also offered their support.

Mr Nawale, however, said, "It's sad the Sena has only offered support. Their presence and the support is welcome but he (Mr Shinde) is a member of the government. Only support is not fair. You call yourselves tigers. When will you use your claws for farmers interests?"