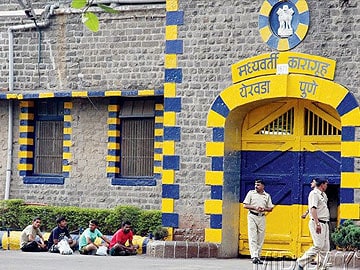 Key actor: An inmate approached the jailor with the lost keys, saying he had found them on the jail premises

Mumbai: In an outrageous bungle-up at the noted Yerawada central prison, a jail guard lost the keys to the prisoners' cells and barracks for a few hours on Monday. Slapping irony on to the injury, it was a prison inmate who saved face for the hangdog authorities, after happening upon the keys and returning them to the jailor.

On Monday evening, as per routine procedure, the prisoners were let out of their barracks and were expected to return at 6 pm after a headcount procedure called bandi. "At this juncture, the jail staff realised that the bunch of keys was lost and that the barracks and gates could not be locked," a jail official said on the condition of anonymity.

Sources revealed that a jail guard - whose name has not been revealed - who is assigned the duty of locking and unlocking the barracks, cells and gates inside the prison, lost the keys.

Immediately, an intensive search operation was launched for the keys, but with no success. Help came from the most unexpected quarters. An inmate approached the jailor with the lost keys, saying he had found them on the jail premises. Officials expressed a stunned relief.

"After the keys were impounded, we began the bandi procedure and concluded it around 8.30 pm," the officer added.
According to the prison rules, the jail superintendent is required to take every necessary precaution against jailbreak escape. They are to make examine doors, windows, bars and bolts daily and refrain from using locks whose keys have ever been lost, mislaid or tampered with.

Superintendent Yogesh Desai, however, claimed that the bandi was completed "just as usual". Asked about the misplaced keys, Desai dodged the question, insisting nothing of the sort had happened on Monday.

"The bandi procedure concluded on time," he reiterated. Former additional director general of police (prison), Rajendra Sonawane, said, "It is an internal issue of administration and discipline. There is a possibility that the jail staff is overloaded with work and forgot the keys somewhere. But the senior officials should investigate and check the intention of the staffer and reprimand him."

Given the less-than-ideal record of security at Yerawada jail (see box), insiders said, the keys could have been put to misuse in the prison, led to attacks on prisoners, or even a jailbreak.

Security lapses in past years

Sep 2013: Officials recover R1,000 from inmate and foil an attempt to smuggle marijuana inside jail

Sep 2011: Murder and gang-rape accused Yogesh Raut bribed Yerawada jail hospital doctors, who then recommended that he be taken to Sassoon Hospital for checkup, from where he escaped

In September 2013, the vigilance team of the state prison department found a mobile phone and SIM card during their search of the jail premises.

Earlier that month, officials recovered cash worth Rs 1,000 from an inmate and foiled an attempt to smuggle marijuana inside the jail.

The same year, Dhule MLA Anil Gote, an accused in the multi-crore Telgi stamp scam case, claimed in the state assembly that he could "break into Yerawada jail by bribing jail officials". "The jailor and police are on the payrolls of the gangs," Gote had said during question hoir, after a query to Home Minister RR Patil.

Promoted
Listen to the latest songs, only on JioSaavn.com
In May 2013, Yogesh Raut, prime accused in software engineer Nayana Pujari's gang rape and murder case, revealed during his interrogation that he had bribed the Yerawada doctors, who helped him escape in September 2011, by recommending that he be taken to Sassoon Hospital for checkup. He could then make his escape from the hospital. He was arrested after 20 months by the Crime Branch in May 2013.

In June 2012, alleged Indian Mujahideen operative Qateel Siddique was murdered inside the prison's high-security anda cell. Qateel's co-inmates, Sharad Mohol and Alok Bhalerao, were arrested on the charges of murdering him.