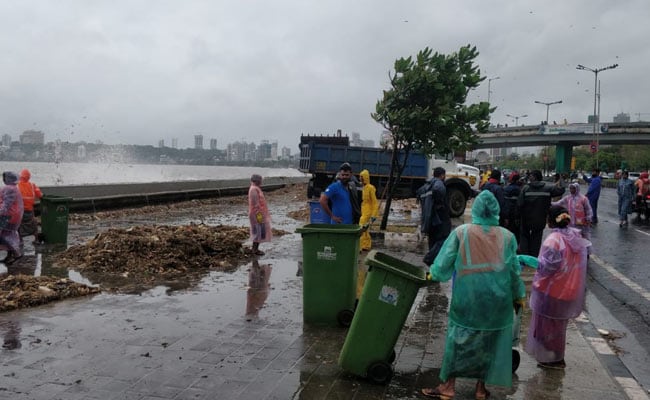 A high tide threw up huge amounts of garbage along Mumbai's iconic Marine Drive today, adding to the city's troubles as it grapples with heavy rain. The weather office has said that the 4.9-metre tide is the highest of four monsoon months.

The Mumbai civic body has deployed 55 labourers, two large compactors, three dumpers, one JCB, and three mini compactors for the effort to remove the trash.

Heavy rain in Mumbai has disrupted normal life, leading to traffic jams and delaying suburban trains. The movement of trains on the Thane and Panvel sections has been affected, leaving thousands of passengers stranded at various stations. The Mumbai civic body has started relief camps at schools in south and central Mumbai, where refreshments are being provided to them. 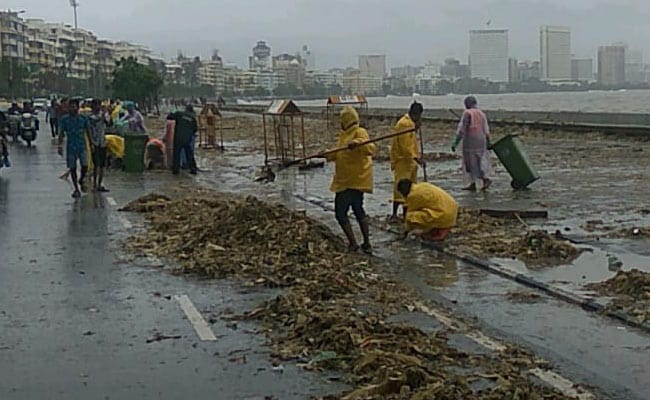 Garbage and stench along the Marine Drive is a common occurence during monsoon.

Citizens have been tweeting about the mess on Marine Drive. Senior police officer and Maharashtra ATS Chief tweeted, "Arabian Sea gives it back to us, Plastic. Marine Drive, during 'High Tide' today afternoon."

See the muck which is thrown back in our face @ marine drive 1.15pm #mumbai#MumbaiRainsLiveUpdates#BMC#PMO#Mumbaikars#MumbaiRainsLive#JaiHindpic.twitter.com/FNxo4omrbX

Schools and colleges in the city also remained closed. Several low-lying areas in the city and suburbs were submerged, severely disrupting traffic. Several flights have also been delayed.

The weather office has warned of extremely heavy rain in the next 24 hours and asked people to not go near the sea.

Thane in Maharashtra was one of the worst affected, with various low-lying places flooded and schools closed. In Palghar, several people were stranded as roads remained flooded. A video also showed cattle being swept away in the water.

Mumbai Police has asked people to be cautious amid the deluge. "As per the weather forecast, intense spells of rain likely to continue in the next 4 hrs and heavy to very heavy rainfall in the next 24 hrs. We request Mumbaikars to take adequate precautions & ensure safety. Dial 100 in case of any emergency. Take care Mumbai," they tweeted.