Ganesh Visarjan: 40,000 Cops, Drones To Keep An Eye On Mumbai 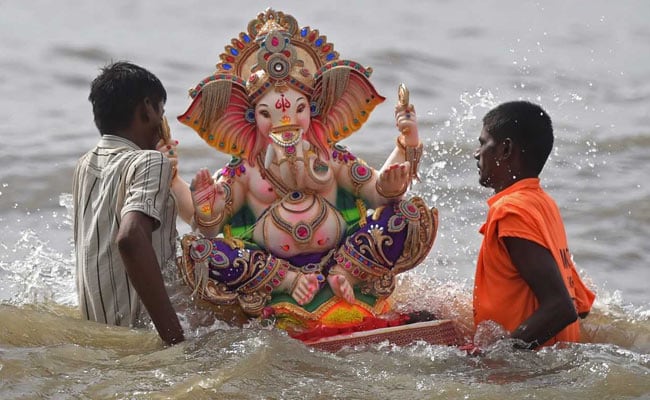 Over 7,600 Ganesh idols installed at public places will be immersed on Tuesday (PTI)

Mumbai: Some 40,000 police personnel will fan out across Mumbai to secure the city under the watchful eyes of over 5,000 CCTV cameras on Ganesh Visarjan on Tuesday. Drone cameras will also fly over tens of thousands of people who will come out on the streets to participate in the Ganesh idol immersion event.

Some 500 traffic wardens along with an assortment of National Cadet Corps students and volunteers from social organisations will help keep the city organised and safe on Ganesh Visarjan, the official said.

The drone cameras will keep an eye at crowded locations such as Girgaum Chowpatty, Juhu, Powai Lake, Dadar Chowpatty, Madh Jetty and Marve in Malad.

"We will use drones for immersion points and as well as for immersion routes. In addition to that we will have 5,000-plus CCTV cameras," Ms Karandikar added.

Over 7,600 Ganesh idols installed at public places and over one lakh idols in homes will be immersed tomorrow. The event will start in the afternoon with smaller idols and continue well into Wednesday morning with the immersion of big idols like Lalbaugcha Raja, which will reach Girgaum Chowpatty at 6 in the morning.

Ganesh Visarjan marks the end of the 10 Ganesh festival in Mumbai, popularised by Bal Gangadhar Tilak who wanted to bring people together to create a feeling of patriotism and fight the British Raj.
Comments
Ganesh VisarjanMumbai PoliceMaharashtra