In visuals on TV, scores of firemen were trying to put out the fire on a spare coach of the train, which was parked at the Mumbai CST yard 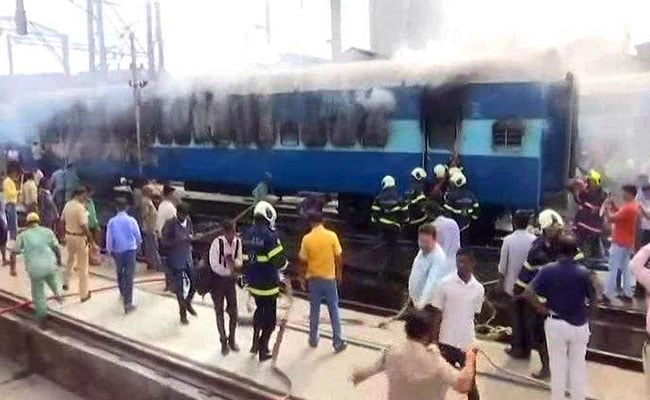 Mumbai: A fire broke out in the spare coach of a train at Mumbai's Chhatrapati Shivaji Terminus (CST) railway yard on Tuesday afternoon. No one was injured, the police said.

In visuals on TV, scores of firemen were trying to put out the fire on a coach of the train, which was parked at the yard. Thick smoke was coming out of the windows.

A huge crowd watched the firefighting operation and the police could be seen trying to control any panic or chaos.

Senior railway officials said the fire was doused soon. They are trying to find out what cause the fire.

"Fire has been doused off. Only one coach was damaged at the washing site of the CST yard. Officials are present at the site and an inquiry has been initiated. Local and long-distance train services will not be affected," a Western Railway spokesperson said.

Before fire trucks arrived, the connecting coaches were shunted out and the adjoining rake on a nearby line was also moved out.
Comments
MumbaiCST railway yard