7 Arrested In Mumbai For Violating Supreme Court Order On Firecrackers 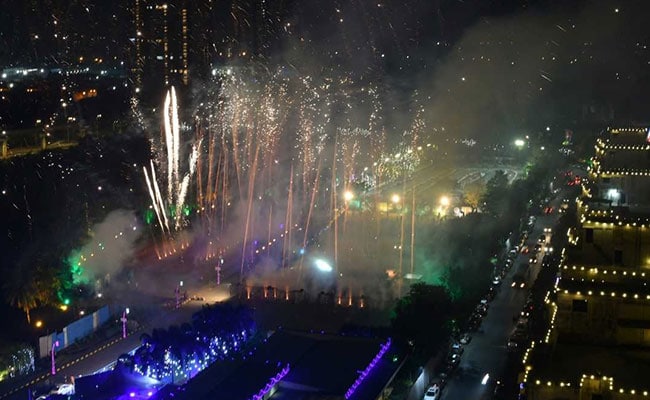 Mumbai witnessed a noisy Diwali this year despite the Supreme Court putting restrictions on bursting of firecrackers.

Some residential areas in the city recorded "high" noise levels Wednesday night against the permissible limits, said environment activist Sumaira Abdulali, the founder of NGO Awaaz Foundation, which has been campaigning for bringing down noise levels.

In gross violation of the top court's order, people in some parts of the megacity burst firecrackers even after the 10 pm deadline.

The Supreme Court had last month permitted sale and manufacture of low-emission "green" firecrackers countrywide and fixed a two-hour time period from 8 pm to 10 pm for bursting them on Diwali and other festivals.

"At some places, noise up to 114.1 decibels was recorded against the permissible limit of 55 decibels in residential areas," she told PTI.

"All I can say is that the Supreme Court's guidelines were flouted, but the state government and its machinery tried their best to check people and adhere to the permissible time limit. Since the last few years, the noise level is coming down," she said.

Ms Abdulali said the Awaaz Foundation's report indicates that all firecrackers tested by it are unsafe for human health and that none of them could be classified as 'green'.

She reiterated her demand for the state government's intervention to facilitate a proper chemical analysis of firecrackers.

They were taken to the police station concerned and fined as per provisions of the Bombay Police Act before being let off, he said.

Apart from this, offences were registered against two unidentified persons in suburban Mankhurd for flouting the top court's directive, another police official said.

The Mumbai Police's Twitter handle also saw a flurry of complaints from across the city of violation of the Supreme Court's directives on bursting of firecrackers.

The complainants were asked to approach their area police station concerned, an official said.

"We have asked all police stations to follow the Supreme Court's guidelines on bursting firecrackers and to ensure action against those violating it," Mumbai Police spokesperson Manjunath Singe said.

Mani Kumar Iyer, a resident of suburban Ghatkopar, complained that some people continued bursting crackers even past midnight. "There were no one to check them," he said.

Another resident from the area, who burst crackers till around midnight, was pointed out the Supreme Court guidelines. However, he said, "I have been doing this (bursting crackers) since I was a child and would keep doing this. Is this a crime?"

Santosh Kumar Singh, a resident of the neighbouring Pune district, said had there been an advisory instead of a ban coupled with the state government's positive campaigning, it would have worked better.

The state government had earlier issued directives to senior officials to ensure compliance with the Supreme Court's order putting restrictions on sale and bursting of firecrackers.