In a photo, the Uber driver, Rohit Gaur, in a checked shirt is seen surrounded by BJP supporters and the party's chief in Mumbai, MP Lodha, as he holds the 'award'

A driver of the ride-hailing app Uber, who made a detour to take a poet to the Mumbai Police after he eavesdropped into the man's conversation on the amended citizenship law, has been 'awarded' by the BJP for being an "alert citizen".

In a photo, the Uber driver, Rohit Gaur, in a checked shirt is seen surrounded by BJP supporters and the party's chief in Mumbai, MP Lodha, as he holds the 'award' - a white rectangle card about the size of two A4 sheets on which it was handwritten "Alert Citizen Award".

The passenger of the Uber car, Bappadittya Sarkar, had booked the cab to go from Juhu to Kurla on Wednesday night. The Jaipur resident had come to Mumbai to attend the Kala Ghoda festival for art.

During the cab ride, Mr Sarkar said he was discussing with his friend (on a mobile phone) people's discomfort with the "Laal Salaam" slogan at the protest against the Citizenship (Amendment) Act (CAA) in Delhi's Shaheen Bagh. 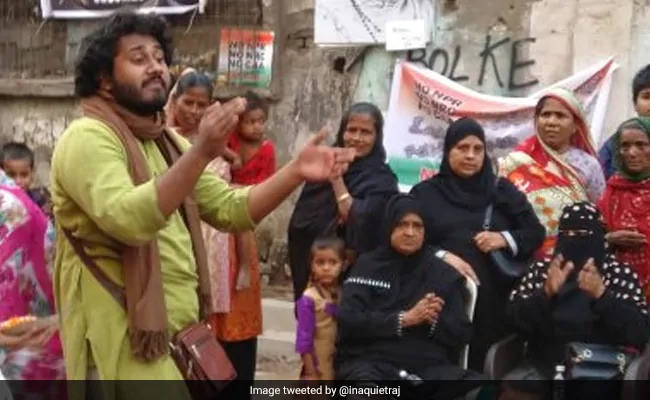 The driver, who was listening, stopped the cab and told Mr Sarkar he wanted to withdraw money from the ATM. Then the driver returned with two policemen, who allegedly asked Mr Sarkar why he was carrying a "dafli" (a percussion instrument), and also asked him his address.

The driver allegedly asked the police to arrest his passenger as "he was saying he was a communist, was talking about burning the country and making a Shaheen Bagh in Mumbai". The driver also claimed he had recorded the phone talk.

"When I asked the driver why he didn't talk to me about all this, he said 'be happy I brought you to the cops, I could have taken you elsewhere also'," Mr Sarkar said.

Mr Sarkar said he was then taken to the police station.

In the profile description on the ride-hailing app, the driver is described as: "He drives because it allows him to study different characters and personalities".

The police asked him about his ideology and "the people he read". According to Mr Sarkar, the police also asked him "absurd" questions like his father's salary and how he sustained himself without a job. And they kept asking why he was carrying the "dafli".

The police have recorded the statements of driver and the poet.

An activist, Kavita Krishnan, tweeted to condemn what she called the "scary episode" involving the poet. "Last night, poet @Bappadittoh had a scary episode in Mumbai, at the hands of an @Uber driver and @MumbaiPolice cops: a glimpse of scary India under NPR NRC CAA, where every person will be incentivised to suspect & turn in others & police can harass everyone," Ms Krishnan tweeted.