Many BJP leaders, including city unit BJP chief Mangal Prabhat Lodha, joined the march which began from the western suburb of Borivali in Mumbai at 4 pm. 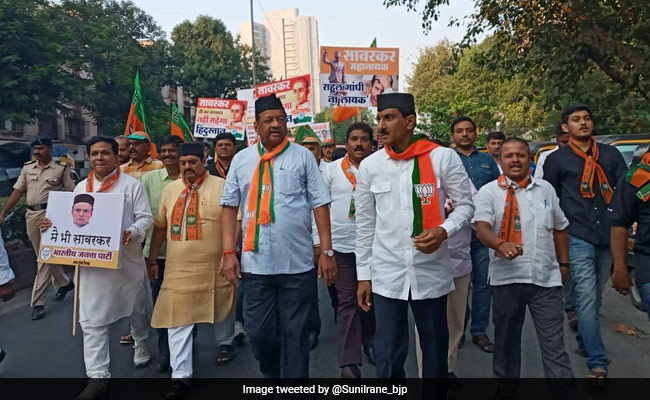 Addressing the Congress' mega "Bharat Bachao Rally" in Delhi on Saturday, Rahul Gandhi rejected the BJP's demand for apology over his "rape in India" remark, and added that his name was Rahul Gandhi, not "Rahul Savarkar", and he will never apologise for speaking the truth.

Many BJP leaders, including city unit BJP chief Mangal Prabhat Lodha, joined the march which began from the western suburb of Borivali at 4 pm.

The march will culminate at Shivaji Park in Dadar, a distance of 25 km. BJP MPs Gopal Shetty and Manoj Kotak, Borivali MLA Sunil Rane and scores of the party workers are also participating in the march.

Meanwhile, senior BJP leader Shahnawaz Hussain told reporters at the BJP office here that the then prime minister Indira Gandhi of the Congress had also hailed the legacy of Mr Savarkar.

"Indira Gandhi's government had issued a commemorative stamp on Savarkar in 1970. Gandhi had even donated Rs 11000 from her personal account to Savarkar Trust. She had also asked the Films Division to produce a documentary film on Savarkar which she personally cleared in 1983," he said.

The former Union minister also cited a letter of Ms Gandhi in 1980 commemorating the birth centenary celebrations of VD Savarkar.