"No Right To Say Divisive Things": UP Minister After BJP MLA's Remark

The BJP had issued a show-cause notice on Tuesday to two of its MLAs for giving a speech against the party line. 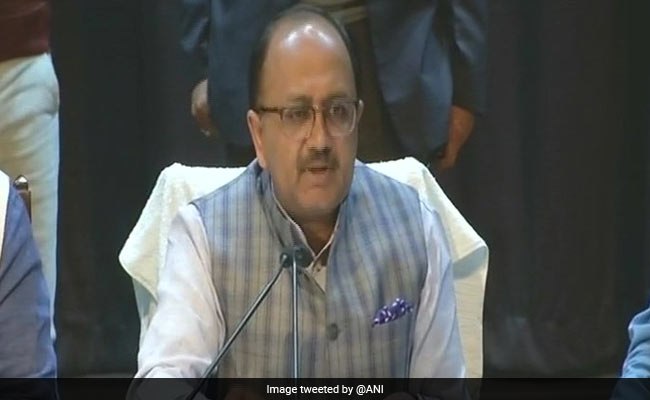 No one has the right to say anything which divides the society, said the UP minister. (FILE)

No one has the right to say anything which divides the society, said BJP leader and UP Minister Sidharth Nath Singh on Wednesday. The comments came soon after the BJP issued a show-cause notice to two of its MLAs from UP for giving a speech against the party line.

The party had issued a show-cause notice on Tuesday to two of its MLAs--Suresh Tiwari, MLA from Barhaj constituency of Deoria district and Shyam Prakash, MLA from Gopamau of Hardoi district, for giving a speech against the party line.

In a separate notice to both MLAs, BJP said: "We have received a complaint against you for giving a speech in public against the party line, which is published in newspapers. The party has taken it seriously. Hence, according to instructions of Uttar Pradesh President, Swatantradev Singh, you are asked to give your clarification within a week."

In a viral video that has surfaced on the Internet, Mr Tiwari is seen asking people not to buy vegetables from Muslims.

Later when asked to clarify his statement, the BJP MLA told media persons, "I had visited my constituency recently. The citizens there told me that Muslim vegetable sellers are applying their saliva on vegetables."

"I told them that I cannot do much in this regard other than advising them not to buy vegetables from such sellers. What more can an MLA say? Was it wrong of me to say so?" Mr Tiwari added.

Based on the continuous complaints of indiscipline, BJP served notice to MLA Shyam Prakash. He had raised questions on corruption in the Health Department.