The vehicle carrying 29 people returning from a wedding function plunged into the Indira Canal in Nagram area on the outskirts of city at around 3 am, said senior official 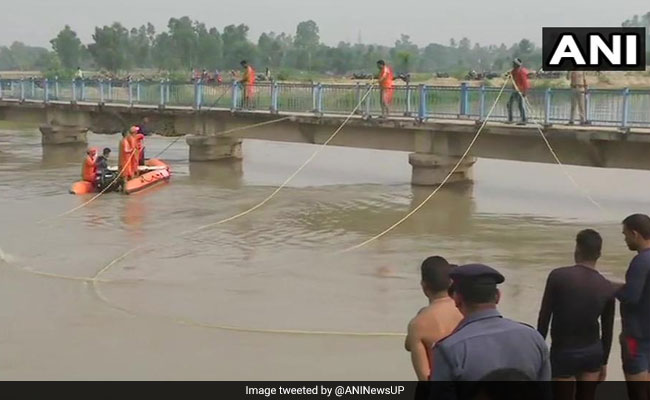 A hunt is on to trace the remaining four children, police said

Bodies of three children were recovered during search operations after seven of them went missing when a pick-up van plunged into a canal near Lucknow Thursday, officials said.

The vehicle carried 29 people, who were returning after a wedding function in neighbouring Barabanki district, and of them 22 were rescued.

Seven children went missing and bodies of three were fished out by divers of the NDRF and SDRF, officials said.

The van fell into the Indira canal in Nagram area on the city outskirts at around 3 AM, Lucknow District Magistrate Kaushal Raj Sharma said.

"Three bodies have been found and hunt is on to trace the remaining four children," Mr Sharma told PTI.

He said the bodies are yet to be identified.

"As many as seven children, all in the age-group of 5 -10 years, are missing. They might have been washed away in the rapid current of the water in the canal... rescue operations are on," Mr Sharma, who rushed to the site, told PTI earlier.

A large crowd of onlookers gathered at the site of the accident where parents of some of the missing children accused the driver of the pick-up van of being under the influence of alcohol.

One of the aggrieved parents, Lajjawati, said, "The driver of the van was under the influence of alcohol and was driving at a high speed when he overshot a bend and the van hurtled down the canal."

She said some of the passengers had repeatedly asked him to slow down but he ignored their plea, leading to the accident.

Sub-Divisional Magistrate of Mohanlalganj tehsil Suryakant said, "The allegation that the driver was under the influence of alcohol is being examined. He has been sent for medical examination to establish whether he had consumed alcohol."

Even the district magistrate said that the vehicle was moving at a fast speed when it fell into the canal.

He said the vehicle has been retrieved and a technical examination will establish the actual reason behind the accident.

"Whether the driver was in an inebriated state is not known. In fact, the driver did not run away and rather helped in rescuing the passengers," Mr Sharma said.

Earlier, the DM said divers were engaged to search the missing children. "In order to control the water flow of the canal, diversions have been made so that the children could be traced. Ambulances have already been deployed at the site," he said.

Immediately on getting the news of the tragedy, Uttar Pradesh Chief Minister Yogi Adityanath directed senior police officials and National Disaster Response Force (NDRF) and SDRF personnel to speed up rescue operations, a statement issued by the UP government said.