This rally is against fascism, people are demanding freedom," participants at the march in Koklata said.

Around 2,500 people including women, tribals, students and artists were at the march.

Around 2,500 people including women, tribals, students, artists, journalists and people with disabilities walked the streets of Kolkata yesterday, with their demand for peace and equality. Called "March4Change", the event brought together a myriad of voices, all against war and oppression.

"We are trying to say that we want freedom from being told what to do. We are speaking out against racism, against divisions based on class, caste and religion. We are demanding the freedom to speak what we want to, wear what we want to. We want to have a democratic set up with all its institutions intact," Anu Kapoor, one of the organisers of the march said.

"Feminists are not just talking about women, they are demand equality and peace. I think it is my rally, and I am not hesitant in putting forth my demands. I am very proud to be here," a participant at the march said.

Nilanjana Bhowmik, a woman at the march said, "I am a feminist, personally and academically, I represent both Jadavpur University and an NGP called Anjali. Woman want to break all the barriers and shackles that have been imposed on them. We want to get rid of many of them." 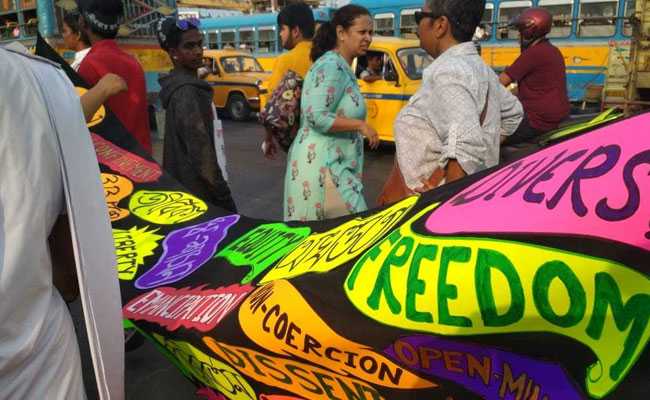 "We are speaking out against racism, against divisions based on class, caste and religion," participants said.

"We have gathered here to raise our voice against the forces of fascism that quell the voice of the public intellectuals and brutally murder rationalists. Now it's time to build collective resistance against these forces," another participant said.

"This rally is against fascism, people are demanding freedom," Rudra Mullick, a transgender said.

Participants at the march said the government has been spreading misogyny across the nation. "We have watched the present government and its followers spread misogyny, hate and lies across the land. As the Lok Sabha elections approach, we say enough is enough," Bhawani Pal, a participant said.

People raised slogan against Love jihad, Romeo squads, Khap panchayat diktats and the vicious trolling of women who dare to speak their mind.