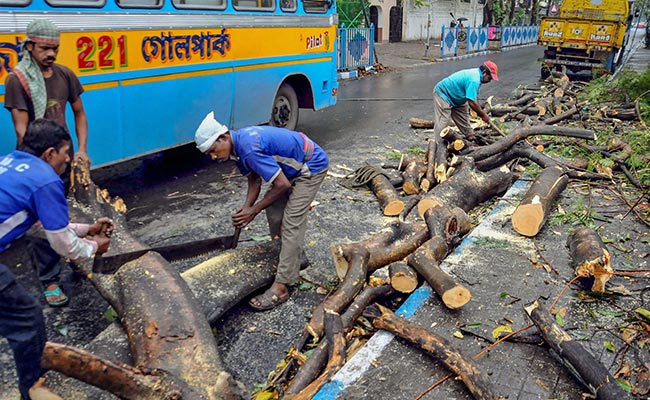 The victims, which includes a 16-year-old girl, are from Purulia, Jhorkhali in South 24-parganas and Baruipur in the state, officials told news agency IANS.

The first storm hit Kolkata around 3.55 am while the second one hit at 4.25 am. Wind speeds, according to the Met Department, were around 50 km per hour. Hailstorms were also reported in some parts of the city along with heavy rain.

In large parts of Kolkata, traffic slowed down because of fallen trees. Some train services -- both long distance and local -- have been affected in the Howrah-Burdwan sector.

Parts like Salt Lake Sector 5, Ballygunge and Lake Gardens were the worst-affected by the storm in Kolkata.

The Kolkata Municipal Corporation (KMC) and the Disaster Management Group, along with the city police, worked on a "war-footing" to clear the trees and the cables, an official said.

Temperatures have dropped by almost 5 degrees across South Bengal after the storms.

The weather department said yesterday that moderate rain with gusty wind will occur in different parts of West Bengal till Thursday morning due to the formation of a western disturbance over Chattishgarh and Jharkhand.