Police baton-charged the protesters as they physically assaulted the policemen who were trying to control the crowd. 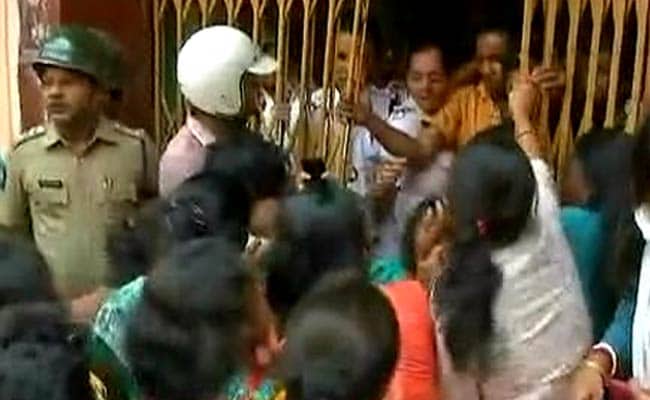 Angry parents tried to enter the Kolkata school to question the authorities.

A school in south Kolkata saw massive protests by parents after a student was allegedly molested by a male teacher a few days ago. The teacher has been arrested.

Angry parents tried to enter the school to question the school authorities. Police had to be brought in to control the crowd. They protesters were baton-charged as they assaulted the policemen.

A few women protesters were seen with their heads bleeding. There was no CCTV inside the classroom where the alleged molestation happened, the protesters said.

"The teacher was taken to the police station. Investigation is on," Deputy Commissioner of Police (South East division), Kalyan Mukherjee said. The police said they whisked him away fearing he could be lynched.

Ten policemen were injured and three people were detained for attacking them.

Ananya Chatterjee, the head of West Bengal's child rights body, said the student was molested by the male teacher. "As a parent, I would be very angry if something like this happened. But violence is not an answer," she said.

A meeting was held between the parents, teachers, police and the child rights protection officer.

The school has decided that male teachers will no longer be appointed in the primary section.

A parent, Samar Kumar Mondal, said his daughter is in Class 3 and there is no assurance from the school that incidents as this won't repeat. "What about her? She will have male teachers and anything could happen. The problem must be addressed. It's not a case of my daughter or your daughter. Schools must be made safe."

The school is 80 years old and is government-sponsored.

In December last year, a four-year-old child at another south Kolkata school was sexually assaulted allegedly by two teachers following which angry parents protested outside the school. The two were arrested soon after. In the same month, parents of another school protested after a three-year-old child was sexually abused by a staff member twice earlier that year.

Earlier this year, a seven-year-old at a primary school in Bengal was sexually assaulted for nearly a month, allegedly by the school's security guard. The man was arrested in February after angry parents of the school's students protested at its gates.