National Green Tribunal has given the state government just six more months to fix the problem.

Kolkata pollution has turned into a great leveler. The man on the street is choking on vehicular pollution and residents of upmarket apartments from noxious fumes from garbage dumps on the city's eastern edge that some say are set on fire, others say, self-ignite.

National Green Tribunal has given the state government just six more months to fix the problem. The government says it is doing its best.

But for 2500 residents of Silver Spring, an upmarket apartment complex on Eastern Metropolitan Bypass, the orders and assurances mean nothing. In desperation, they have unfurled a red flag of protest against two-pronged pollution they are suffering from -- fumes from vehicles passing by on the arterial road and from Kolkata's burning garbage from dumps barely a kilometre away.

The 20-foot red flag can be seen by traffic passing by and on it is written an SOS: fumes from burning solid waste at the Dhapa -- the name of the dump - kill.

"The red banner is to create awareness. This pollution does not differentiate among people. It will harm celebrities, netas, businessmen and poor people equally. It has to stop," a resident said.

Rajesh Tayal, who heads the residents' association at Silver Spring says, "We have garbage dumps very close to our housing complex and they are burning and continuously emitting dangerous fumes. Sometimes, we can even see the fire. We have told municipal authorities but their assurances have been empty." 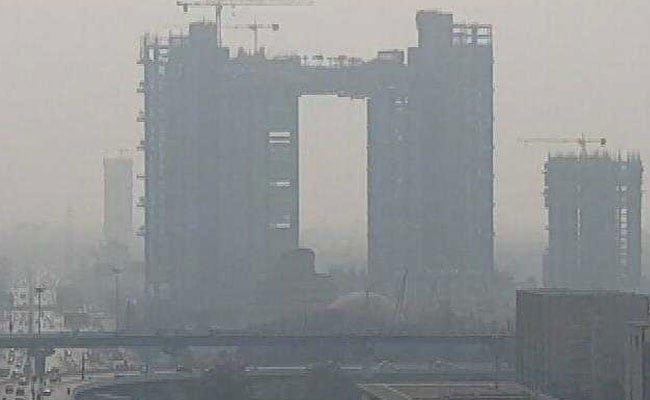 The situation turned so grim this winter, they installed an air quality monitoring machine in the complex that has been hitting the "very poor" level all the time.

Residents also expressed their fear for their children's health. Some people have stopped going out for morning walks.

Kolkata Police has issued a notice against waste burning on 28 December. But clean air activists say laws exist but are not implemented.

"Who will identify which vehicle is 15 years old? How will they identify vehicles coming from all over the state and other parts of the country? All this is just a misnomer and eyewash to mislead the court," said Subhash Dutta, a lawyer-activist who has gone to court against the government's failure to curb vehicular pollution.

Another activist, Jayanta Basu, said in November and December 35 out of 61 days had very poor air quality days which is the same as Delhi.

"The bottom line is the state government is only pushing back the goalposts. After 10 years it has come back with the same notification. The green tribunal has said the next hearing of the case is on 30th June till then we will continue to breathe poison," Mr Basu said.

Hopefully, that is not the last word on Kolkata's noxious air.