A group of carollers, wearing skullcaps and headscarves -- traditional clothing worn by Muslims -- sang carols for Christmas at a church in Kozhencherry in Kerala's Pathanamthitta district. 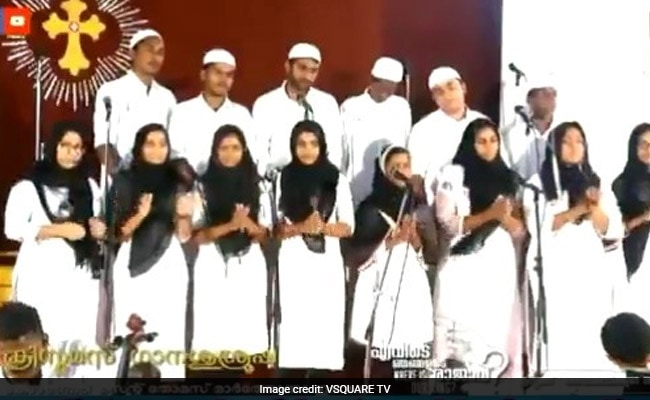 The video of the carol singing has been shared widely on social media.

A church in Kerala found a unique way to show solidarity with the people from the Muslim community as protests continue across the country against the Citizenship (Amendment) Act.

A group of carollers, wearing skullcaps and headscarves -- traditional clothing worn by Muslims -- sang carols for Christmas at a church in Kozhencherry in Kerala's Pathanamthitta district.

The Christmas carols were sung at St Thomas Marthoma Church by a choir, according to a local online channel which broadcast the video.

The video of the carol singing performance has also been shared widely on social media and was even tweeted by Congress MP from Kerala Shashi Tharoor.

Ah yes - "you can tell who themy are from their clothes "! https://t.co/BQArDRy2hr

Protests have broken out in various parts of the country ever since the parliament passed the Citizenship Amendment Bill on December 11, and at least 25 people have been killed, scores more injured and thousands detained.

The men singing the carols can be seen wearing skullcaps while the women donned headscarves (or hijab) as a mark of solidarity. According to a report, the carols were performed to the tune of folklore Muslim songs -- known as Mappila songs.

Recently, Prime Minister Narendra Modi, at a campaign rally, said that violent protesters can be "identified by the clothes they are wearing." However, his comment was faced with backlash from various political leaders and activists who accused the PM of being "callous" and harbouring "shallow" thoughts and said his divisive message was aimed at profiling a particular community.