"We're With You," Rahul Gandhi Tells His Flood-Hit Constituency Wayanad

Rahul Gandhi chose Wayanad as his second seat in addition tothe party stronghold of Amethi in Uttar Pradesh, which he, however, lost to Smriti Irani of the BJP. 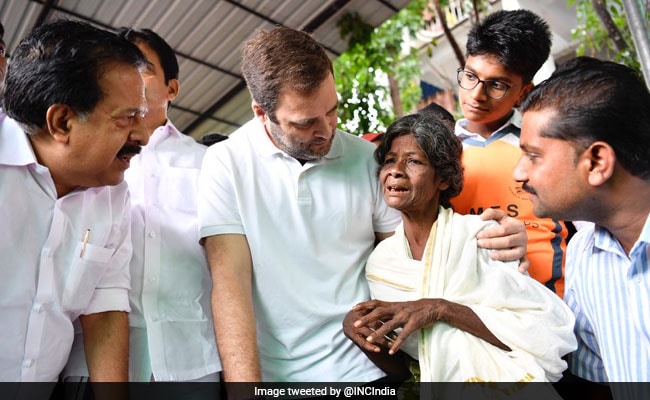 Rahul Gandhi has been visiting visiting relief camps and reviewing relief operations in his constituency.

Congress leader Rahul Gandhi, camping in his Wayanad Lok Sabha constituency in Kerala, today appealed for help to provide relief material to those hit by the devastating floods.

Mr Gandhi, who has been visiting areas affected by floods and landslides in his constituency, posted the appeal on his Facebook page.

"My Parliamentary constituency Wayanad has been devastated by floods with thousands left homeless and shifted to relief camps," Mr Gandhi said.

The Congress leader also listed the essential items that are in shortage in his constituency.

He appealed to donors to send the material to collection centres in Malappuram district, which he listed.

Mr Gandhi, who is on a two-day tour to Kerala, has been visiting visiting relief camps and reviewing relief operations in his constituency.

This morning, he visited a relief camp at the hill town of Thiruvambady, part of Wayanad constituency. "I know it is a difficult time but I request you not to worry for your future. We're going to stand with, We're going to help you & we're going to make sure that you're able to rebuild your life," he said while addressing at the relief camp.

He also told the gathering that he had spoken to Prime Minister Narendra Modi on Sunday seeking help for the state. "Today is Eid and though I know that the people are distressed, I take this opportunity to wish all of you 'Eid Mubarak'. Let us take the spirit of Eid to help all our brothers and sisters who are in pain and in suffering today," said Mr Gandhi.

He had on Sunday termed as ''heart breaking", the suffering of people due to floods and landslides in his constituency and urged the state and Central governments to provide immediate aid to those affected by the floods in Kerala. "We will do everything in our power to help them get back on their feet," Mr Gandhi tweeted from his Wayanad account.

I visited the epicentre of Puthumala landslide in Meppadi district in Wayanad. This is the site of a terrible landslide that destroyed an entire village, many people are still feared to be trapped & rescue work is ongoing. pic.twitter.com/K1fimQmXuC

On Friday, Mr Gandhi described the situation in his constituency as "grim" and said he had spoken to Prime Minister Narendra Modi about aid.

This is his second visit to Wayanad after the election.

Rahul Gandhi won with a record margin from the hill constituency in the April Lok Sabha elections.

Mr Gandhi chose Wayanad as his second seat in addition to the party stronghold of Amethi in Uttar Pradesh, which he, however, lost to Smriti Irani of the BJP.