The protesting legislators demanded withdrawal of prohibitory order imposed in and around Sabarimala. 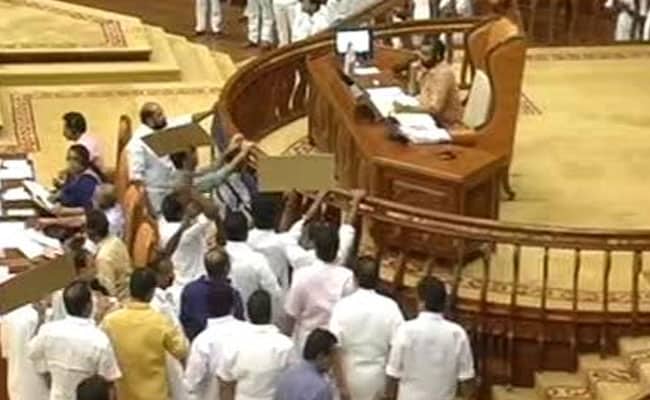 Protesting legislators rushed to the Well of the Kerala Assembly

Kerala Assembly witnessed noisy scenes on Wednesday after the opposition Congress members rushed to the well of the House, shouting slogans against the state government for its "inept" handling of the Sabarimala issue.

The protesting legislators demanded withdrawal of prohibitory order imposed in and around Sabarimala hill shrine and an immediate discussion on the situation in the Assembly. Some members kept on shouting slogans, standing near the Speaker's podium and displayed banners and placards that flayed the Left-led government.

They said the state government has been insensitive to the devotees and was putting too many restrictions on them, referring among others to the prohibitory order under Section 144 of the Criminal Procedure Code -- a measure that bans the assembly of four or more people in an area.

The Assembly Speaker not allowing the Opposition members to air their views led to arguments between Chief Minister Pinarayi Vijayan and Leader of Opposition Ramesh Chennithala.

The Opposition members said the Chief Minister was given 45 minutes to speak during Question Hour, whereas Mr Chennithala was denied the chance to speak.

As soon as the House met at 8:30 am, the opposition members raised slogans against the state government. Mr Chennithla said "the House is not the place to show how healthy the Chief Minister is," referring to the "long speech" made by Chief Minister Pinarayi Vijayan. Kerala Speaker P Sreeramakrishnan said  the behaivour of the opposition members were "unusual and unacceptable" and adjourned the House.

The lone BJP MLA O Rajagopal and a few opposition legislators wore black shirts as a mark of protest against the police action against the Sabariamla devotees.

The state government is facing opposition for using force against the devotees who are protesting against women aged between 10 and 50 entering the temple after a Supreme Court in September. The top court ruling lifted the ban on the decades-old ban on women of menstruating age offering prayers at the hill shrine. But no woman aged under 50 has been allowed to enter the shrine as protesters have fought street battles with the police to keep them away.