Bearing idols of Neithilakkavilamma and colourful parasols atop it, the tusker symbolically pushed open the gates of the ancient temple. 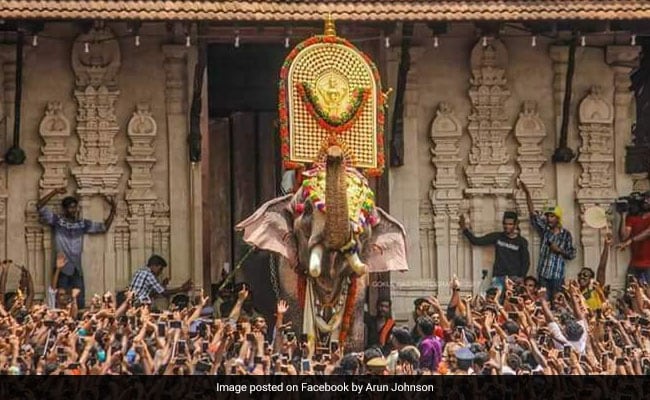 The 54-year-old elephant has been performing at this ritual since 2014.

Scores of devotees cheered as Kerala's beloved one-eyed elephant waded through the corridor of the famed Vadakkumnathan temple in Thrissur on Sunday after it was given a conditional nod by the district authorities to participate in the Thrissur Pooram festival.

Citing violent behaviour, the district authorities, in February this year, had imposed a stringent ban on the elephant, Thechikottukavu Ramachandran, after it trampled upon two people during an event. The tusker has reportedly killed 14 people in the last thirty years.

The ban was, however, lifted on Saturday after Ramachandran cleared medical tests conducted by a team of veterinarians, following which the report was sent to the District Collector TV Anupama, who gave the final nod.

Bearing idols of Neithilakkavilamma and colourful parasols atop it, the tusker symbolically pushed open the gates of the ancient temple.

The crowd, which was made to stand several feet away from the elephant, cheered as the elephant entered the aisle of the temple.

The 54-year-old elephant has been performing at this ritual since 2014. Despite his infamy, he is fancied by a lot of people in the state.

Following the ban, the authorities had moved the Kerala High court, which had refused to intervene in the matter. Later, the Kerala Elephant Owners Federation had announced via Facebook that it would not make any elephant available for elaborate temple festivities.

Now, even though the order was reversed on Saturday, a few restrictions still loom large over the tusker. It can now take part in the ritual only for an hour from 9.30 am; four people must escort the animal and barricades should be constructed on a 10-metre radius to prevent people from getting closer to the jumbo.

Thrissur Pooram is an annual Hindu temple festival held in Kerala. This year, it will take place on May 13 and 14.