Parents too are a worried lot as the examinations are being held after the Onam festivities during the month end. 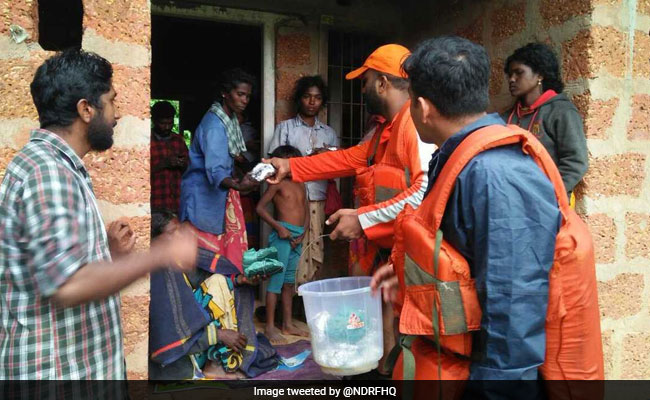 The monsoon fury over the past few days have compounded the worry of children housed in relief camps in Kerala with their text books and study material washed away in the heavy rains and the first term exams looming large.

Parents too are a worried lot as the examinations are being held after the Onam festivities during the month end.

Stepping in to assuage their apprehensions, the state education department has given instructions to distribute fresh textbooks, notebooks and other study materials free of cost to the children accommodated in hundreds of relief camps.

Instructions have also been given to conduct special classes for them to make up for the missed classes before the exams beginning on August 31.

Parents and children, expressing concern about the missed classes and lost books, are a common sight in many camps.

"We have given directions to the deputy education officers in respective districts to take necessary steps to distribute textbooks and other study materials to children in relief camps," general education secretary A Shahjahan told PTI.

Education department officials would coordinate the initiative with school managements and district collectors concerned, he said.

"Extra classes will be taken in respective schools for children to help them cover the missed lessons. As of now, Onam examinations are scheduled to begin on August 31 in the state," the senior bureaucrat said.

State-run schools are doubling up as relief camps in many districts.

The opening of the relief camps have affected regular classes in these schools also.

"If we continue to stay here, won't it affect the classes in these schools?" Neethu Krishna, an upper primary student, asked higher education minister K T Jaleel when he visited a relief camp at a local school in northern Malappuram district recently.

She was one among the hundreds of children living in relief camps along with their parents.

Safeena, a homemaker in Wayanad, who had to shift to a camp after rain water entered her house, expressed anguish over her son's impending exam.

"He (son) has no books now. We could not take anything. They all might have been destroyed by now. I do not know how he can study...the exams are just days away," she said.

Some children try to find some time for studies amid the clamour and distressful hours in camps.

Meanwhile, a picture of a tribal boy, scribbling letters on a broken slate, at a camp near Edamalakkudi tribal settlement in Idukki district has gone viral.

Over 60,000 people have been displaced and rendered homeless with the death toll rising to 39 in the downpour since August 8.