Read inOther Languages
This Article is From Mar 14, 2020

Kerala Traces US Couple Who Skipped Coronavirus Test, Quarantines Them

Coronavirus: The US citizens, based in London, had left a hospital in Kerala's Alappuzha district without informing doctors.

Three more people, including an Italian national, tested positive for coronavirus in Kerala on Friday.

An American couple with symptoms linked to coronavirus, who went missing from a hospital in Kerala on Friday, were tracked down to an airport in the southern state and placed under isolation.

The US citizens, based in London, had left a hospital in Kerala's Alappuzha district without informing doctors. "They had come with some symptoms of viral and were advised test for COVID-19. They left the hospital and were untraceable. They were tracked down late Friday night at the Kochi International airport and have been put under isolation," the Alappuzha district collector told NDTV.

Three more people, including an Italian national, tested positive for coronavirus in Kerala's capital Thiruvananthapuram on Friday, taking the total count of patients in the state under treatment to 19 - the most number of cases in India.

"An Italian tourist has tested positive and is kept in isolation there itself. The other person is a UK-returnee and is in the isolation ward at the medical college hospital," Chief Minister Pinarayi Vijayan said. The third person is from Thiruvananthapuram, he added.

The Alappuzha district administration has put out a detailed flow-chart with exact date, time and location of the two indian returnees who have tested positive, so people can help with further contact tracing.

Sabarinathan, an MLA of the opposition United Democratic Front (UDF), has alleged lapses, saying the person who returned to Kerala from Italy had told officials at the airport and later went to medical college for testing. "At the medical college , after testing, he came back in an autorickshaw, stopped at an outlet for buying some juice, and at a petrol pump for the autorickshaw's re-fuelling. These are lapses which aggravated the situation, after he has turned positive," he said. The collector, however, has said that primary and secondary tracings have been done, and that flow-charts made for public will help further. 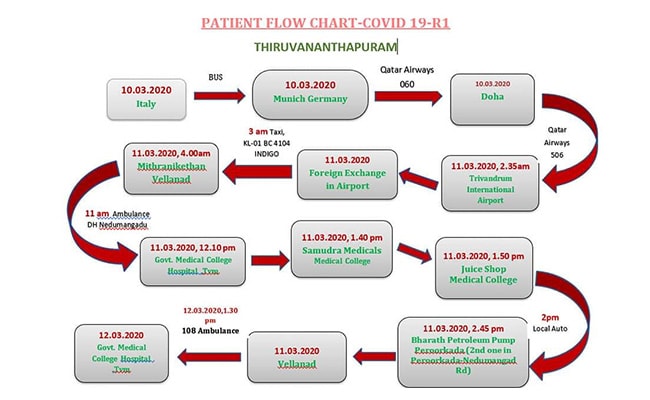 The first three positive cases in the state were cured and discharged from hospitals last month. At least 270 people are in isolation wards at various hospitals in the state and over 4,000 people under observation, of which 3,910 are under home quarantine.

Kerala has set up three testing facilities to tackle the viral infection that has that has infected 1,31,500 people in 116 countries and territories and killed more than 4,900. 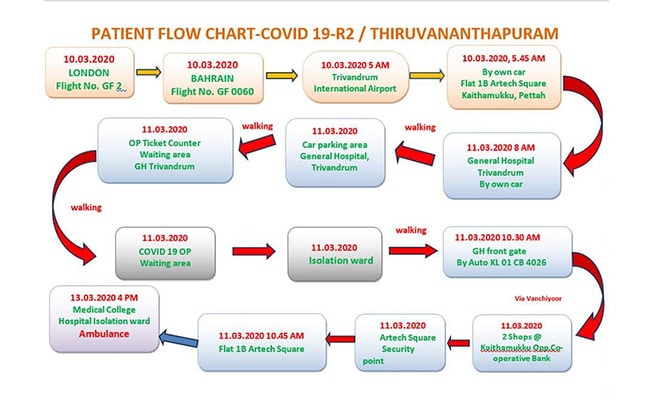 India has reported two deaths due to the coronavirus so far - a 68-year-old Delhi resident became the country's second victim on Friday.

The Union Health ministry put the number of positive cases at 82, eight more since Thursday night, including the 76-year-old man from Karnataka who became the first to die of coronavirus in the country, besides 17 foreign nationals.

Officials, however, maintained that coronavirus is not a health emergency and there is no need to panic.