Pranav handed over a cheque of Rs 5,000 to Pinarayi Vijayan as his contribution to the Chief Minister's Disaster Relief Fund.

Pranav was born without hands, but he didn't let that get in the way of his dream of becoming an artist. He began painting with his feet, brush lodged firmly between his toes. And on his 21st birthday today, he used his feet again in the presence of Kerala Chief Minister Pinarayi Vijayan at the legislative office in Thiruvananthapuram.

It was to extend a cheque of Rs 5,000 as his contribution to the Chief Minister's Disaster Relief Fund.

"I think differently because I was born different. I never celebrated my birthday until today because I come from poor family, and we could not afford anything. But today, when I gave away the cheque of Rs 5,000, it was like tasting 1,000 cakes," Pranav, a degree holder from Palakkad's Alathur, told NDTV.

But then, things changed one day. Pranav participated in a reality show telecast on the Flowers TV channel, and the gateway of opportunity suddenly swung open for him. "We were sad at the beginning, when he was born, but now we are happy. The world knows us through him - as his parents," said her mother, Suvarna Kumari. 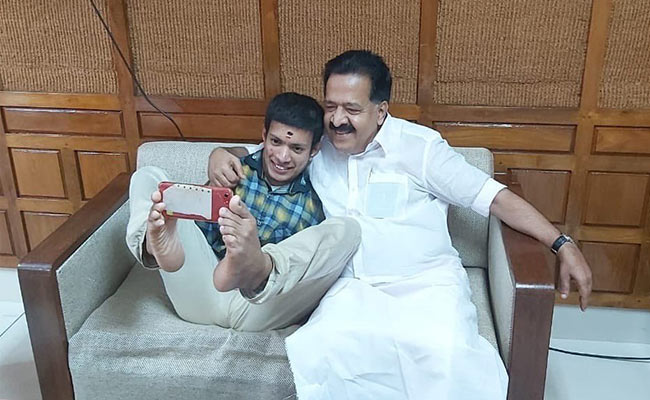 Pranav wants to be an inspiration for others like him. "I decided to celebrate my birthday by donating a part of the sum I received from the Flowers TV reality show and other programmes I participated in to the Chief Minister's Disaster Relief Fund. I want to inspire people. I won't hold myself back, thinking that I have no hands. I'm not disabled. I am differently abled. I believe in the motto - I can," he said.

His father, a carpenter, agreed. "My son does everything that others do, but with his feet. We don't see it any differently. He is full of potential," said a visibly proud Balasubramanian.

The meeting with Pranav seemed to have left a lasting effect on the Kerala Chief Minister too. "Had a very touching experience this morning. Pranav, a painter from Alathur, visited me in the legislative office to hand over his contribution to the CMDRF. Pranav expressed happiness over the support given by the government to differently abled persons," he tweeted.

Opposition leader Ramesh Chennithala, who also met him the same day, seemed just as impressed. "Pranav is a painter who paints with his feet. But not just that, he does everything we do using his feet - from typing on the mobile phone to taking selfies. Pranav is a role model on how to positively handle challenges in life," he wrote in a Facebook post.