Sabarimala temple: The four were dressed in black sarees, but the police allegedly asked them to change into menswear if they wanted to enter the Lord Ayyappa temple 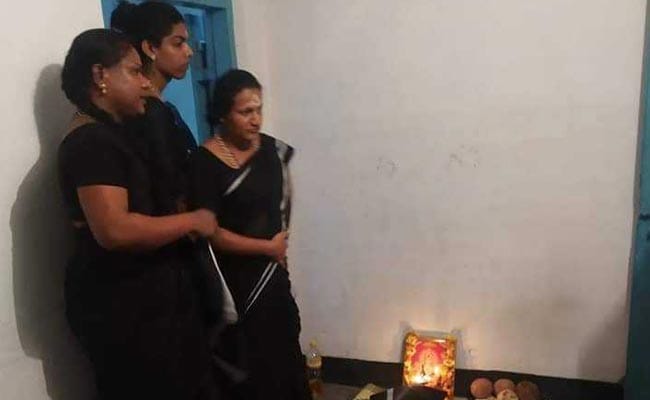 Sabarimala temple row: Ananya and three others began their journey from Ernakulam on Saturday.

A group of four transgender devotees on their way to Kerala's Lord Ayyappa temple were allegedly stopped at Erumeli, about 50 km from Sabarimala, this morning by the Kerala police, who said "there was no clarity on the issue". Ananya, who along with three friends, were taken to the Erumeli police station where the officers allegedly discouraged them from proceeding further.

"We began our pilgrimage on Saturday from Ernakulam and the special branch wing of the police was witness to the prayers and all the ritual functions that we undertook. But when we reached Erumeli, the cops, even women officials, were quite rude," Ananya told news agency IANS.

"The ban on menstruating women is not applicable to us. We had explained that to the police, they were not ready to allow us to the temple," Ananya added.

Ananya, Trupti, Renjumol and Avanthika were dressed in black sarees, the traditional attire for the pilgrimage, and were carrying the customary 'irumudikettu' (sacred offerings to God). Ananya alleged that they were ridiculed and even asked by the officers to change into menswear if they wanted to enter the Lord Ayyappa temple.

"Initially, we refused but after some time, we decided to change our clothes. However, the police still asked us to return," Ananya added.

They now plan to approach the high court against the police's action.

Kottayam's Superintendent of Police S Harishankar, however, rejected the charges of harassment and said everyone has the right to offer prayers at Sabarimala.

"We need to get some more legal clarity in this regard. So, we will approach the high court-appointed panel and seek their advice," he told reporters.

Sabarimala has been witnessing protests ever since the Supreme Court allowed women of all ages to enter the temple. However, since the historic order, no woman of menstrual age has been able to enter the hilltop shrine because of massive protests by the devotees who believe changing the tradition would be an insult to Lord Ayyappa.

More than a dozen women tried and failed to make it to the Sabarimala temple, even with heavy police protection. Thousands have been arrested during protests across the state.

The Supreme Court will begin hearing petitions seeking review of its order from January 22.