BJP state general secretary and NDA candidate from Pathanamthitta, K Surendran, alleged that the Kerala government is trying to eliminate him from the poll fray. 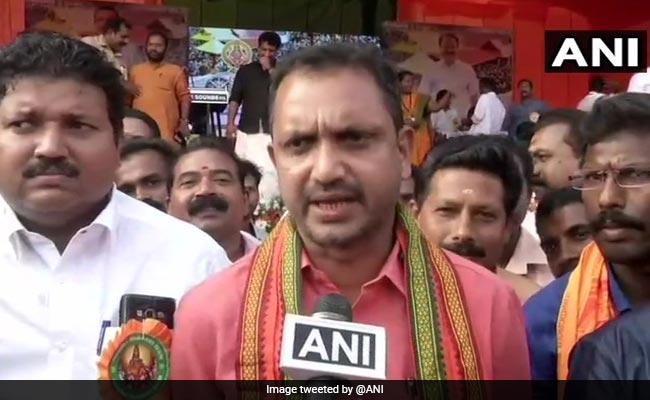 BJP state general secretary and NDA candidate from Pathanamthitta, K Surendran, will file his nominations papers afresh today after reports emerged that the Kerala government informed the state High Court that over 240 cases are registered against him.

Mr Surendran filed his nomination on March 30, stating that there are 20 cases against him.

However, news reports emerged on Wednesday that the state government on March 29 submitted an affidavit in the High Court saying there were over 240 cases registered against him.

The BJP leader alleged that the state government is trying to eliminate him from the poll fray.

"This is a clear case of political vendetta. I will be filing fresh nomination papers and affidavit after rectifying errors," Mr Surendran said.

The charges against Mr Surendran include criminal conspiracy, attempt to murder and damaging public property.

Most of the cases are related to the Sabarimala agitation.

He is contesting against two-time MP Anto Antony of Congress and Aranmula MLA Veena George.

The BJP, RSS and Sabarimala Karma Samiti, among others, had organised state-wide protests against the state government's decision to implement the September 28 2018 Supreme Court order, allowing women of all ages into Sabarimala.

The state had witnessed violent protests by devotees, in which many people, including women and journalists were assaulted.

Mr Surendran was arrested during the Sabarimala protests and jailed for more than 20 days.

A local court granted him bail with stringent conditions, including that he should not enter Pathanamthitta district for two months.