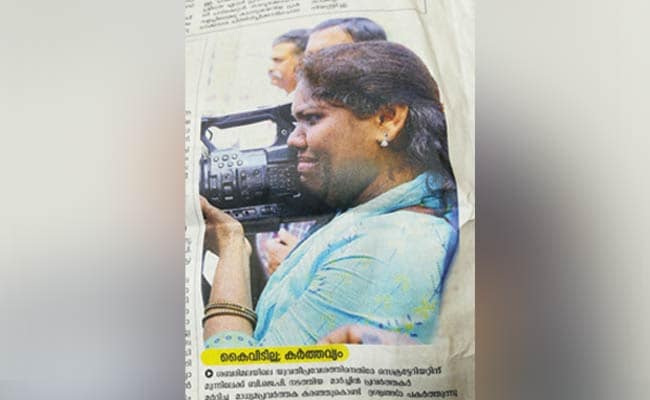 A newspaper clipping of Shajila Abdulrahman, who kept filming as she was targeted by protesters

Tears streaming down her face, a cameraperson kept filming as she was targeted by Sabarimala protesters on Wednesday. The powerful image is in wide circulation on social media as protests rage across Kerala over two women entering the Sabarimala temple defying a decades-old ban on women below 50, or of menstrual age.

Several in the media faced attacks during a 12-hour shutdown call by right-wing groups.

The cameraperson in the image, Shajila Abdulrahman of Kairali TV, suffered blows from protesters in state capital Thiruvananthapuram. She was abused and heckled, but she kept filming. The protesters even tried to snatch her camera.

She is in hospital and needs to wear a neck-brace.

"I was not crying out of fear. I was in tears because of helplessness," Shajila told NDTV. She admitted she used the camera to try and hide the tears.

"What could I do if five-six people come from the back, snatch my camera, hit me and push me down? How do I retaliate? I was crying because I realised I lost precious visuals and time to shoot, as I had to get back my camera, plug in the batteries and restart the camera. I didn't want people to see my pain, and that's why I tried to hide my face with the camera."

In tweets, people have praised Shajila's "bravery and professionalism".

The protests began after two women in their forties walked into the hilltop shrine around 3.45 am on Wednesday morning, escorted by policemen. They were the first to achieve their mission since the Supreme Court ended the restriction on women between 10 and 50 entering the shrine; more than a dozen women tried to visit Sabarimala over the past three months but were blocked by protesters.

After the two women succeeded, right-wing groups who have strongly opposed the Supreme Court order ending the ban accused the ruling Left of hurting Hindu sentiment.

Attacked by parties like the BJP and the Congress, Chief Minister Pinarayi Vijayan yesterday said the women were helped by devotees. He also said he was duty-bound to follow the Supreme Court order.

The shutdown on Wednesday was called by Sabarimala Karma Samithi, an umbrella organisation of various right-wing groups, and the Antarrashtriya Hindu Parishad (AHP). Three journalists were injured during the protests in Thiruvananthapuram, which spurred a boycott call by the media.