Adam Harry was beaten by his orthodox parents, confined to the four walls of his home and dragged to counselling centres for saying he was a man trapped in the body of a woman. 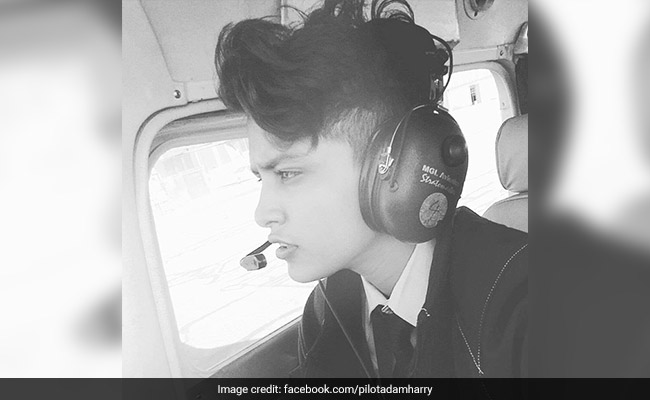 Adam Harry had to sleep on streets and do odd jobs to find money for his fees and living expense.

He had confusions about his gender since childhood but never ever about his dream career - to become a pilot and fly aeroplanes criss-crossing the vast skies.

He was beaten by his orthodox parents, confined to the four walls of his home and dragged to counselling centres for saying he was a man trapped in the body of a woman.

Finally, he had to run away from home to escape endless torture. But, the determination to chase his dream has helped this Keralite, Adam Harry to fight all torture and harassment over his gender and become the first transman pilot of the country to get private pilot licence, two years ago.

Now, at the age of 20, his dream of becoming a commercial pilot is set to be a reality as the Kerala government has sanctioned over Rs 23 lakh to help him pursue his further studies at a reputed institution here.

"I am really grateful to the government for the helping hand. Otherwise my dream will never have become a reality. The fund of Rs 23.37 lakh was sanctioned on Thursday. I am planning to join the Rajiv Gandhi Academy for Aviation Technology RPT Technology here for the three-year studies and training to get a commercial pilot licence," Adam Harry told PTI.

Harry, who belongs to an orthodox Muslim family of Thrissur district, completed his schooling, and then joined an aviation academy attached to Lanseria International Airport in Johannesburg, South Africa.

Though his family had initially supported him in joining the academy and get an education loan for his foreign studies, they stopped all the assistance after he continued to express about his real gender.

The youngster said he had to undergo severe struggles during the final months of the training in South Africa as his parents stopped all help abruptly.

He had to sleep on streets and do odd jobs to find money for his fees and living expense.

"But, I completed my training and received the private pilot licence in 2017. I returned to India but my parents continued their pressure me to suppress my gender.

Finally, I had to run away from my home last year," he said.

Despite having a private pilot licence, it was difficult for Harry to find a good job and earn.

"After moving out of home, I stayed in several places with the support of transgender friends. I got a job at a private aviation academy in Kochi but they did not pay me.

Later, I even worked in a juice parlour to make both ends meet," he said.

Harry said his parents had shifted their home to another place after the first report about him had appeared in a newspaper.

"Even when we say Kerala is trans-friendly, the attitude of people and society towards the transgender has not changed much. It is true there are several government schemes for them but it reaches to only a few people. Others are still suffering the harassment and abuse of society," he said.

The young transman also said it was difficult to suppress the real gender whatever pressure and torture he or she had to undergo.

He is also hopeful of getting a job in any airline company after getting the commercial private licence after the studies with the government support.