Before taking part in Prime Minister Narendra Modi's first rally in the state, supporters had prayed at the temple, they said. 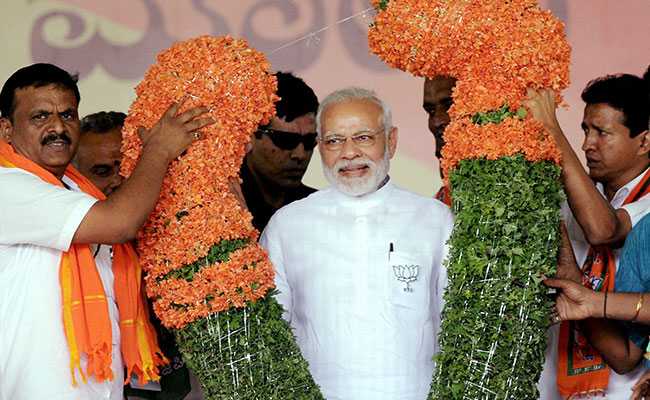 Udupi, Karnataka: Prime Minister Narendra Modi's supporters are offering potted tulsi plants at a famous shrine in Karnataka's Udupi, seeking divine help for the BJP to unseat the Congress in the state.

Forty-five-year-old devotee Keshavacharya travelled all the way from Shiruru village, 22 km from Udupi, to pray at the 800-year-old Sri Krishna temple for PM Modi and his party's success in the crucial May 12 Assembly polls.

Before standing in a long queue at the shrine with a potted tulsi plant, Keshavacharya said he had taken personal care to grow it.

At least one lakh tulsi plants are offered by devotees on a daily basis at the temple with a desire to get their personal wishes fulfilled.

"I decided to offer it (tulsi plant) at the temple for Modi's success," Keshavacharya told news agency PTI.

Before taking part in the Prime Minister's first rally in the state, they had prayed at the temple, they said.

The project to offer one lakh tulsi plants to Lord Krishna has been initiated by Palimar Mutt's Vidyadheesha Tirtha Swami, who has got a second term to administer the temple.

The project is to dedicate one lakh tulsi leaves of gold -- estimated to cost around Rs 32 crore -- to the Lord during his tenure that will end in 2020.

The devotees, who cannot afford to contribute a golden tulsi leaf weighing one gram, are given the opportunity to render service by offering tulsi plants for 'tulsi archan' being performed daily since January, he said.

Asked if temple officials have come across devotees like Keshavarcharya, he said, "There may be. It is difficult to know with what prayers devotees visit the temple and offer tulsi plants. We never ask about it."

With growing demand for tulsi plants, the temple's project has encouraged employment opportunities in Udupi with many nurseries being set up in the last three months.

The temple too has undertaken tulsi cultivation in around 14 acres in Udupi, Vedavasa Tantri added.