Siddaramaiah vs Yeddyurappa: Inside Their Social Media War Rooms

Karnataka Chief Minister Siddaramaiah of the Congress and BS Yeddyurappa of the BJP have been fighting for resonance and reach online ahead of the state elections with hashtags like #BJPInsultsKannadigas and #10PercentCM.

Yeddyurappa's social media team was formed three months ago with a team of 25 professionals.

For instance, Siddaramaiah's tweet after Prime Minister Narendra Modi, in a recent rally in the former’s home turf in Karnataka, asked whether the Congress state government was "commission driven or mission driven".

Some one from Mysuru would never have allowed a fugitive runaway with 11500 cr under his Chowkidari. https://t.co/HW2q7ACNGN

Within moments came the response from the 72-year-old BJP leader:

Well well, this 'special someone' (who abandoned Mysuru), did allow the very same fugitive's uncle #ChoksiScam,to escape from Karnataka by flouting the Civil Court Order way back in 2015.This is none other than our own #SleepingChowkidar @siddarmaiah. Is it part of #10PercentCM ? https://t.co/vjtnC6dlPn

So what's the secret of their Twitter game? In a gist: hire the pros.

Stationed in a rented apartment in north Bengaluru, a social media team has been planning out the social media campaigns for Mr Yeddyurappa. The social media professionals have been hired by Rajneethi, a Bengaluru-based group which claims to have been doing social media and data management for political parties for the past seven years and has clients in 15 states.

Three months ago, they came on board Team Yeddyurappa, with a team of 25 professionals.

When NDTV visited their office, the BJP stalwart was in Shimoga, 300 km away. But his Twitter handle was lit up by activity.

Vijay S, the business head of Rajneethi says hashtags on Mr Yeddyurappa's social media accounts like #ElectionHindu (to describe Rahul Gandhi's temple visits) and #10PercentCM (alleging kickbacks by the Chief Minister) are the brain child of his team.

"We sit together, we discuss and we keep a track of what's happening on a daily basis. Regarding the #10PercentCM, we put a very nice tweet that says that the Mangalyaan mission (to Mars) itself cost Rs 450 crore, but laying roads for a stretch of 12 km in Bangalore costs Rs 468 crore. It actually shows the inefficiency of the present Congress government," he said.

The Congress war room, not far away is headed by Mr Siddaramaiah's son, Dr Yatindra. 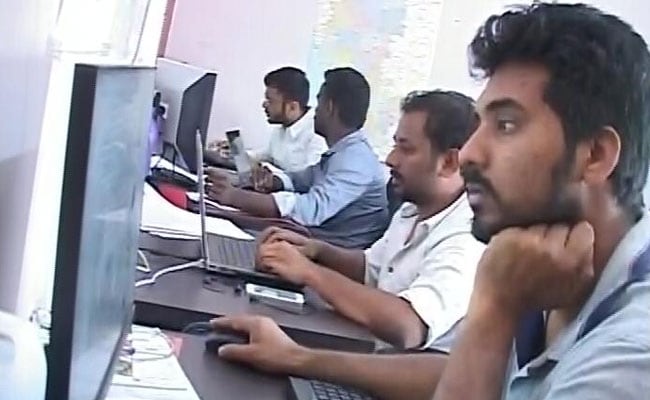 Congress says most of the social media activists campaigning for Siddaramaiah are volunteers.

"He (the Chief Minister) has his own team and we have our own professional team here. They are largely responsible for the tweets put up on the CM's handle. My role was just to initiate the process because before September, we didn't have any social media set up.  Congress party's presence was very minimal in social media", he told NDTV.

To Mr Yeddyurappa's one million Facebook followers, the Chief Minister's - about 500,000 followers -  is much smaller but his team say they are catching up.

"All followers of the CM are genuine there are no fake accounts," says Dinesh Gundu Rao, spokesperson of the Karnataka Congress.

And how much does it all cost?

"Most of the people are inclined to work with our ideology on a voluntary basis," said Dr Yatindra.

Rajneethi accepts their service is a "little expensive", but refused to share numbers.
Comments
Karnataka electionsBJPCongress