Supporters Protest As Ex-Congress Minister Left Out Of Karnataka Cabinet

Upset at not being included in Karnataka cabinet, Satish Jarkiholi has already quit as secretary of the All India Congress Committee 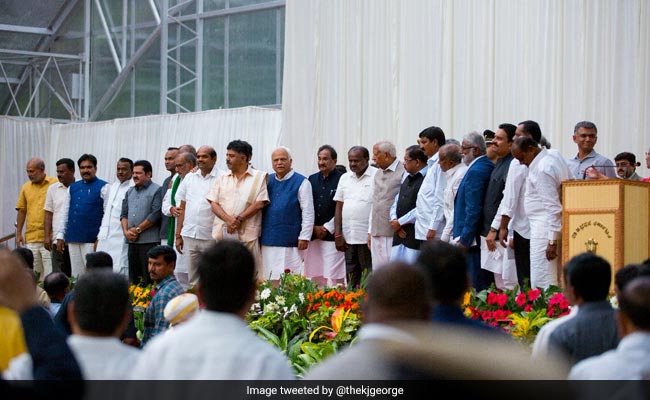 Bengaluru: Supporters of former Karnataka minister Satish Jarkiholi have protested against his exclusion from the state cabinet. Mr Jarkiholi who belongs to Belagavi in north Karnataka had resigned as the secretary of the All India Congress Committee (AICC) after he was left out of the first cabinet expansion earlier this month. Congress, which has been allotted 22 out of the 34 cabinet berths in the coalition government with the Janata Dal Secular, is yet to fill up six slots.

On Tuesday, supporters of Mr Jarkiholi, a three-time lawmaker who has already said he would not accept a ministerial berth now even if he was offered, assembled at Bengaluru's Freedom Park to register their displeasure over what they called a justified demand.

The gathering drew people from as far as Kalburgi district. "We have been protesting from the time the expansion happened without him (Mr Jarkiholi). We will protest until he gets a cabinet berth", said DK Madankar, one of his supporters.

Another supporter from Mysuru district said it was sad that a man who brought Congress workers together had been left out. "Instead of giving him a berth, they are playing around with him. They are cheating someone who has struggled so hard. Who else will they give the berth to?"

Promoted
Listen to the latest songs, only on JioSaavn.com
Other Congress leaders who may have expected to be picked as ministers include former Home Minister Ramalinga Reddy, former Irrigation Minister MB Patil, and Working President of Karnataka Pradesh Congress Committee (KPCC) Dinesh Gundu Rao who may also be in contention for the post of state Congress chief.

The Congress leadership does not seem in any great hurry to fill the empty berths, perhaps realising that it may intensify the protests. With some berths open, those not yet included would still have hope.
Comments
Satish JarkiholiKarnataka cabinet