Diganth and Aindrita Ray are not the first movie stars in Karnataka to be linked with what the police believe to be an illegal drug racket that involved the procurement of illegal drugs and their use at parties. 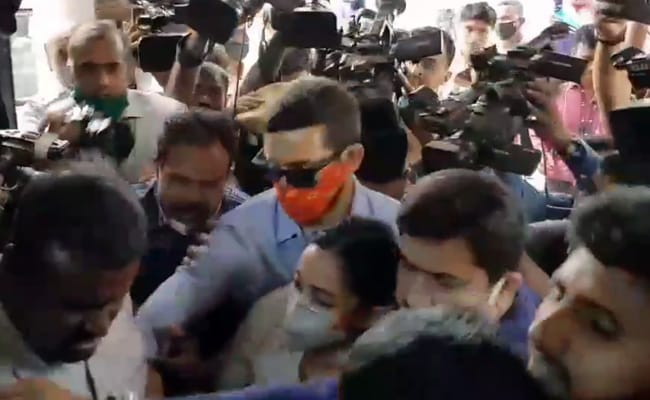 Kannada actors Diganth and Aindrita Ray were questioned at the CCB HQ in Bengaluru.

With the drugs scandal involving prominent names in the Kannada film industry only getting bigger, it was the turn of actor couple Diganth and Aindrita Ray to find themselves being probed by the Bengaluru police on Wednesday.

The two actors had been summoned by the investigating team to appear at the headquarters of the Central Crime Branch or CCB in the morning and they arrived soon after 11 am to be quickly engulfed by jostling camera teams.

Diganth and Aindrita are not the first movie stars in Karnataka to be linked with what the police believe to be an illegal drug racket that involved the procurement of illegal drugs and their use at parties.

These parties, the police have said, were attended by members of the Kannada film industry among others.

Among those arrested in the case so far are a foreign national believed to have supplied drugs, Loum Pepper Samba, and a party organiser, Viren Khanna.

Actor Ragini Dwivedi was among the first to be arrested - suspected to be involved in supply of drugs - and is in judicial custody.

Another actor, Sanjjanaa Galrani, also thought to be involved in the parties, was arrested last week and is in police custody.

On Tuesday, a property belonging to the family of Aditya Alva, the son of late Karnataka politician Jeevaraj Alva, was searched by the police who believe parties were held there - and that drugs were available at those parties. Aditya Alva has not yet been arrested and his whereabouts are unknown.

The police said they had also arrested another suspected drug dealer in the case, Benald Udenna, who they say supplied drugs to the parties.

Additional Commissioner of Police, Sandeep Patil, said Aindrita and Diganth were questioned and will be called again for further inquiry at a later date.

The state government says it inherited the drug problem.

H K Patil, Congress leader told NDTV, "Unfortunately only a few faces are being shown. The real people who are behind this drug trafficking are still not exposed. I would like the real culprits to come up. Whoever it is, that party, this party, this minister, that minister - all should be exposed."