HD Kumaraswamy's JDS, which initially wanted 12 seats, has scaled down. Depending on winnability, which Rahul Gandhi was concerned about, the party will get nine or 10 seats, HD Devegowda told NDTV. 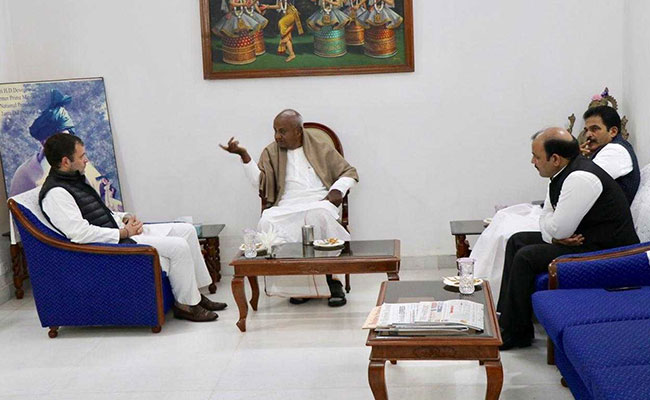 The Congress and the Janata Dal Secular finalised its seat sharing in Karnataka today in Delhi with a 19-9 division, sources said. The details were worked out a meeting this morning between Congress chief Rahul Gandhi and former Prime Minister HD Devegowda, who flew down to Delhi for this. The nitty-gritty - including identification of the seats - has been left to the General Secretaries of the two parties.

HD Kumaraswamy's party, which initially wanted 12 seats, has scaled down. Depending on winnability, which Mr Gandhi was concerned about, the party will get nine or 10 seats, Mr Devegowda told NDTV.

"Our focus is to win the elections with as many seats for the alliance and we will concede a seat or so," he told reporters after the meeting. "Now Our General Secretary Danish Ali and Congress's GS Venugopal will hold further discussions," he added.

Mr Devegowda, who indicated earlier that his party was ready to be flexible, said he had asked the Congress chief to follow the 1/3 and 2/3 formula, which the alliance has used for cabinet formation, nominations or board corporations.

Unlike other states, it is the choice of seats and not numbers which
are a problem in Karnataka, a senior party leader had explained to NDTV. Both the parties are eyeing seats like Mysore, Tumkur and Chitradurga and sharing of these contentious seats are expected to be the biggest hurdle.

Ahead of the coming Lok Sabha elections, the Karnataka coalition is being keenly watched as an indicator of how well the Congress can work with smaller regional parties.

The BJP is also watching it as a marker of the cohesiveness between the Grand Alliance. The failure of the Karnataka coalition would be seen as an example of a lack of opposition unity.