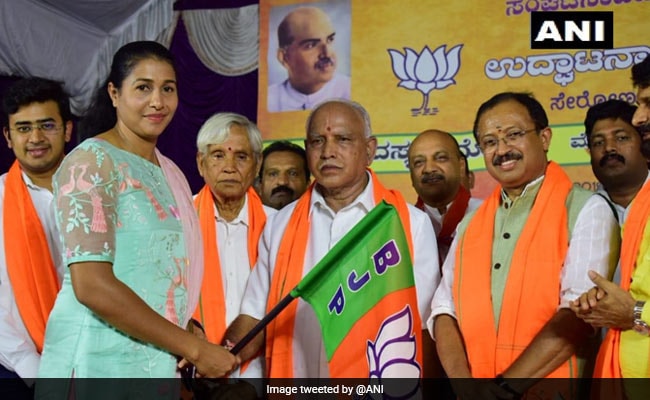 Anju Bobby George attends an event of the BJP in Bengaluru

Union Minister of State for External Affairs V Muraleedharan on Sunday dismissed media reports that claimed award-winning athlete Anju Bobby George had joined the BJP at an event in Bengaluru. Mr Muraleedharan told reporters there was nothing political about the meeting that took place on Saturday.

"I have had a long association with Anju and her husband Robert Bobby George. Yesterday, I had a party programme in Bengaluru. She called me and asked if we could meet to which I agreed. When she came to the programme in which I was taking part, the event was about to begin. So I invited her to the dais, as she is an internationally acclaimed athlete," said Mr Muraleedharan, the only leader from Kerala in Prime Minister Narendra Modi's cabinet.

"As the meeting was going on, we talked and not a word of politics was spoken. She was talking about her institute," he added.

Former long-jumper Anju Bobby George, 42, a resident of Kottayam in Kerala, is working with the customs office in Bengaluru.

In 2003, she made history by becoming the first Indian athlete to win a medal at the World Championships when she won the bronze in Paris with a leap of 6.70 metres.

She achieved her personal best of 6.83 metres, which is still a national record, at the 2004 Athens Olympics which fetched her fifth position.

An Arjuna awardee, she has represented the country at the Olympics, Commonwealth Games, Asian Games and World Championships from 2002 onwards.