"I resigned today as a befitting tribute to Jaipal Reddy," said an emotional KR Ramesh Kumar. "I resigned so I should get liberated. I am now free from all shackles". 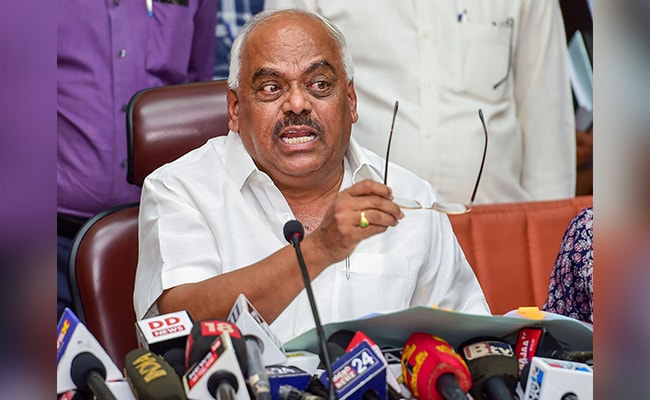 "I felt that I should not sit there even a moment longer," KR Ramesh Kumar said

A little over an hour after the trust vote in the Karnataka assembly on Monday, the man who was in the Speaker's chair in Bengaluru was at the funeral of his mentor Jaipal Reddy in Hyderabad. The BJP government led by BS Yediyurappa sailed through the trust vote in the Karnataka assembly today after a bitter power struggle, that saw the 14-month-old coalition government of the Congress and HD Kumaraswamy crash when 16 lawmakers resigned and two independents switched sides.

"I resigned today as a befitting tribute to Jaipal Reddy," said an emotional KR Ramesh Kumar. "I resigned so I should get liberated. I am now free from all shackles".

"I felt that I should not sit there even a moment longer. That is why I completed my moral obligation to the Constitution, put in my papers, thanked the assembly and came out,'' said Mr Kumar.

Over the last week, the Speaker had been under pressure as the coalition government crashed. After Tuesday's trust vote, the Speaker had to take a call on the lawmakers who had resigned, invoking disqualification.

Going from case by case basis, he disqualified 17 of the lawmakers for the ongoing assembly session - a decision that was hailed both by the coalition and the BJP.

Ramesh Kumar said Jaipal Reddy's passing had been instrumental for him to take decisions as the Speaker of the Karnataka assembly. "Probably my decision was a little late after I heard that he is no more, but I thought it is my most befitting tribute to him,'' he said.

The fight is not over, Mr Kumar said. "It is all not to our tune and taste but we have got to survive, fight it back, we will fight it. He has physically left us, morally he has not left me, it makes me even more courageous now to face this onslaught,'' he added.

Reminiscing about the man who has been called an exemplary parliamentarian, Ramesh Kumar said Mr Reddy had been a "disciplinarian in private life, well-informed about all ideologies, an astute politician who meant and said public life was only for public and nothing for private; that's why we all adored him''.

"It was not just oratorial skills, conviction is very important, he believed in whatever he spoke, he spoke responsibly, that is why we loved him,'' he said.

The 77-year-old Mr Reddy, who was a minister in the UPA government led by Manmohan Singh, had died at a hospital in Hyderabad on Sunday.