The fishing boat called IFB Qamrul Bahar was stranded 15 nautical miles off the Karnataka coast when the Kasturba Gandhi ship went to the rescue. 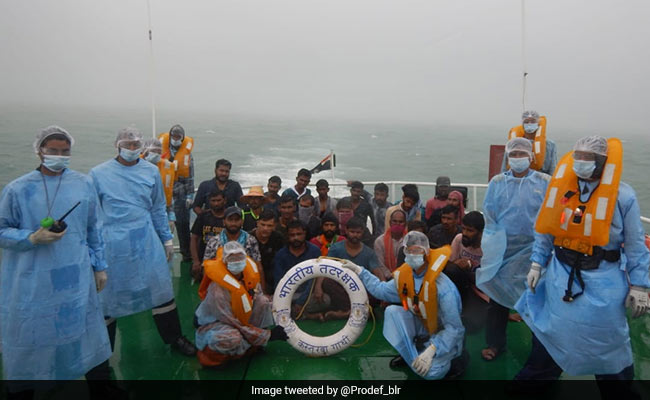 Twenty-four fishermen stranded at sea due to heavy rainfall were rescued by the Indian Coast Guard today off the Karnataka coast.

The fishing boat called IFB Qamrul Bahar was stranded 15 nautical miles off the Karnataka coast when the Kasturba Gandhi ship went to the rescue.

The coast has been receiving very heavy rainfall which led to the fishing boat being stranded. The rescue was carried out off the Bhatkal port.

The Defence spokesperson of Bengaluru tweeted on the rescue and said, "In view of rough weather conditions in area the owner of fishing boat, which had lost propulsion power had requested DD Fisheries Karwar for rescue of fishermen. The entire rescue operations at sea was undertaken and at around 1030 h on 11 Sep 2020 all fishermen in good health were shifted on board by ICG Ship."

Heavy rainfall since August 1 in Karnataka has killed at least 20 people, displaced thousands, damaged more than 10,000 homes and crops in about 4.03 lakh hectares, and wrecked 14,182 km of roads in the state.