The driver, who was allegedly also assaulted by the vigilantes who forcibly stopped and searched his truck, has been charged with "illegal transport" of cows

The driver of a truck transporting cattle in Karnataka's Chikkamagaluru district has become the first person to be arrested under a new ordinance that prohibits the slaughter of cows.

The driver, who was allegedly also assaulted by the vigilantes who forcibly stopped and searched his truck, has been charged with "illegal transport" of cows and is being treated at a local hospital. A separate case has been filed against his attackers.

"A group of unidentified persons attacked the driver of the vehicle transporting the animals. The driver, who was attacked, is currently undergoing treatment at a local hospital. He has also been booked for illegal transport of animals," the police were quoted by news agency ANI.

Karnataka Law Minister JC Madhuswamy said he was not aware of either the arrest or the alleged assault. He said that the attack on the driver was "not acceptable" but also defended provisions in the law that critics said would encourage vigilante activity.

"With good intention we have formulated the law. If it leads to goondaism, I don't mind discussing the same. Nobody can be made free to take the law into his hands. It is wrong. We have not allowed them to have goondaism in the name of the anti-cow slaughter Act," he said.

"We have made a provision. If, with good intention, someone stops the movement of vehicle, or stops purchase or sale... it cannot be taken as a cognizable offence. That word we have added," he added.

However, the ordinance also offers protection for "persons acting in good faith", and says no legal proceeding can be launched against authorities or person using powers under this ordinance. 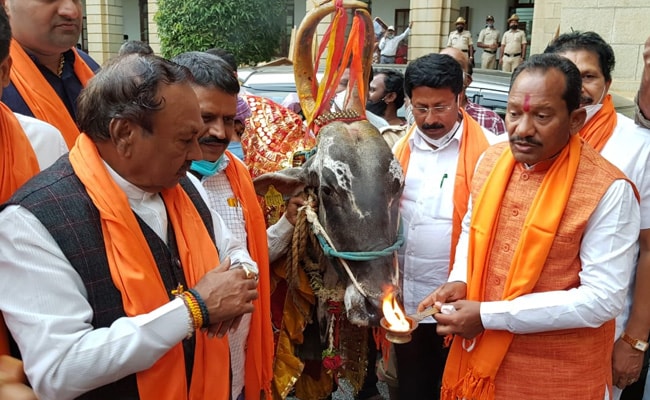 The BJP brought cows into the Karnataka Secretariat, after tabling the cow slaughter bill, for a puja

Many expressed concern over the ordinance when it was cleared by the Assembly last month, including the opposition. The Congress said it would hurt farmers' interests and accused the ruling BJP of trying to polarise communities by targeting beef and its consumers ahead of local elections.

The JDS also opposed the bill, with former Chief Minister HD Kumaraswamy tweeting a long and detailed list of problems with the legislation, including a "fear that provision to allow police and other officials to inspect premises may lead to harassment and fear psychosis".

The ruling BJP has never hidden its plan made to introduce legislation on this issue.

KS Eshwarappa, the state's Rural Development minister, told NDTV last month: "The BJP government was there earlier and banned cow slaughter. But the Congress cancelled that and made cow slaughter possible. Now our life has become blessed. The dream of those who love cows has been realised."

The Karnataka Prevention of Cow Slaughter and Cattle Preservation Bill (2020) was passed by the Assembly amid vociferous protests, including a walkout by the Congress. However, it could not get through the Legislative Council where the BJP is in a minority. The government then sent it as an ordinance to the Governor and it was cleared last week.