Anand Singh is the legislator from Karnataka's Vijayanagar.

Two Congress legislators in Karnataka put in their papers today, in fresh trouble for the ruling Congress-Janata Dal (Secular) coalition in the state. Anand Singh resigned first, and hours later Ramesh Jarkiholi gave his resignation to the Speaker.

While the Congress has yet to confirm his resignation, Mr Singh says that he has quit and went to meet the Governor. A senior Congress leader termed his exit "shocking".

The Congress and the JD(S) are wary of a potential revival of what is referred to as "Operation Lotus". The term was first used in 2008, when the BJP was accused of inciting several opposition legislators to defect to ensure the stability of its government headed by BS Yeddyurappa.

"I have submitted by resignation as the people of my constituency are agitated over the government's approval to lease out government land to the Jindals," Anand Singh told reporters. The state assembly speaker's office confirmed receiving the legislator's letter on Monday afternoon.

With two lawmakers gone from the Congress, the party will be down to 77 members in the assembly. The JDS-Congress alliance has 116 lawmakers in the 224-member Karnataka assembly where the majority mark is 113. The BJP has 105, BSP has one and there is one independent. 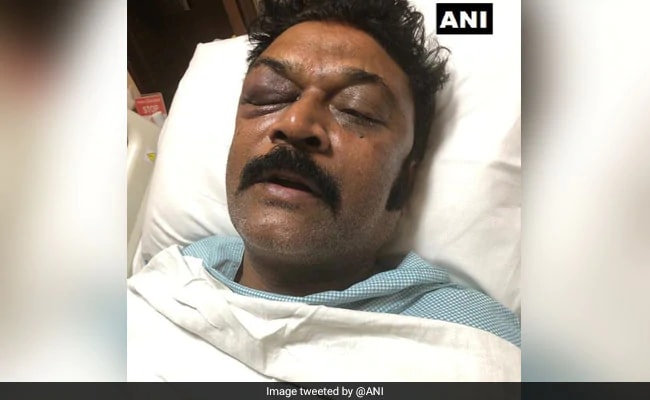 Earlier this year, Anand Singh was hospitalised with injuries after an alleged fight with a colleague. (File)

Karnataka Chief Minister HD Kumaraswamy is currently in the US on a private visit. "I'm at Kalabhairaveshwara temple foundation laying ceremony (in New Jersey). I'm watching TV channels. Destabilising government continues to be a daydream of BJP," Mr Kumaraswamy tweeted.

The BJP in Karnataka is keeping a close watch. "Even I have heard about his (Anand Singh's) resignation through media. We don't want to destabilise the government... If the government falls on own its own, we will explore the possibilities of forming the new government but there is no question of fresh elections," Karnataka BJP chief and former chief minister BS Yeddyurappa said.

"Anand Singh resignation is shocking to me... I spoke to the Chief Minister. There is no problem in the coalition government," senior Karnataka Congress leader and minister DK Shivakumar said.

Anand Singh, the legislator from Vijayanagar, was hospitalised earlier this year after he was allegedly thrashed and abused by another lawmaker during their stay at a resort on the outskirts of Bengaluru where Congress legislators had been taken for safe-keeping.

It was said that Mr Singh had been involved in dissident activity but that he was convinced to stay with the party at that time.

The Congress has been fighting dissidence since the beginning of the year, with several Congress legislators openly critical of the party and staying away from legislature party meets that had been called.