The JDS will be contesting the Mandya and Shivamogga Lok Sabha seats and the Ramanagara assembly constituency and the Congress has put up candidates in the Lok Sabha seat in Ballari and assembly seat in Jamkhandi. 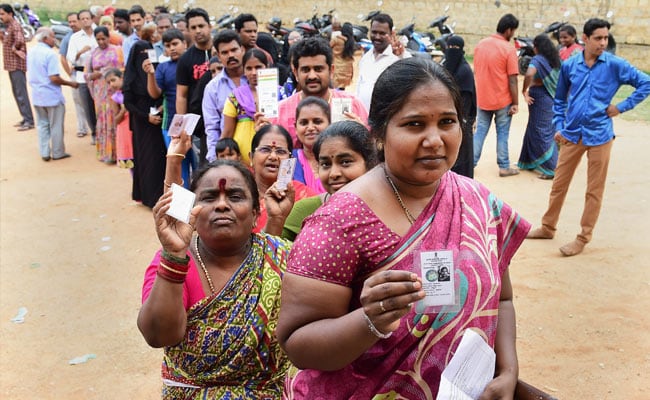 Karnataka By-Elections: The results for the five seats will be declared on November 6. (File)

Congress and JDS fielded joint candidates in all the seats, the JDS will be contesting the Mandya and Shivamogga Lok Sabha seats and the Ramanagara assembly constituency and the Congress has put up candidates in the Lok Sabha seat in Ballari and assembly seat in Jamkhandi. The results for the five seats will be declared on November 6.

Here are the LIVE updates of Karnataka By-Elections:

Nov 03, 2018 23:11 (IST)
The voting in the three Lok Sabha and two Assembly constituencies of the state have concluded, with the Bellary parliamentary constituency recording the highest voter turnout on Saturday, according to news agency ANI.

Legislative assembly constituencies Ramanagaram and Jamkhandi recorded 73.71 per cent and 81.58 per cent of voting, respectively. 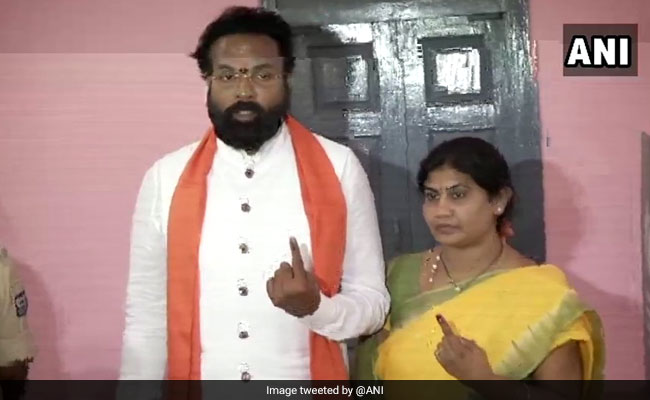 Nov 03, 2018 15:41 (IST)
About 35% polling reported till 1 pm in Karnataka by-polls
About 35 per cent voting was recorded Saturday during the first half of polling for the by-polls to three Lok Sabha and two assembly constituencies in Karnataka.

While the Lok Sabha constituencies of Shimoga, Ballari and Mandya have recorded 30.20, 35.72, 26.80 per cent voting, respectively, till 1 pm, the assembly segments of Ramanagara and Jamkhandi reported 39.81 and 43.50 per cent respectively.

#KarnatakaByElection2018: Madhu Bangarappa, JDS candidate from the parliamentary constituency of Shimoga cast his vote at a polling booth in Kubtur, today. pic.twitter.com/IujMdbQrNA

Nov 03, 2018 13:55 (IST)
A total of 54,54,275 voters are eligible to exercise their franchise in about 6,450 polling stations.
There are a total 31 candidates in the fray in all the five constituencies, though the contest is mainly between the Congress-JDS combine and the BJP.
A total of 1,502 polling stations have been declared as sensitive, reported Press Trust of India quoting election officials.
A total of 35,495 polling personnel are on duty for the bypolls in which 8,922 voter verifiable paper audit trail (VVPAT) will be used, officials said.
Nov 03, 2018 13:34 (IST)
Ramanagara candidate called HD Revanna, who has the same name as that of the chief minister's brother, is representing a party called Purvanchal Mahapanchayat. This is seen by many as a bid to confuse voters and divide the JDS vote.
Nov 03, 2018 13:31 (IST)
Congress candidate Anand Nyamagouda casts his vote at Jhamkhandi and said: Voting For Crucial By-election In Karnataka Today
The contenders in fray for today's by-election in Karnataka.
Nov 03, 2018 10:44 (IST)

Nov 03, 2018 10:07 (IST)
BJP candidate J Shantha casts her vote along with her family members in Ballari. Shantha is the sister of BJP leader B Sreeramulu. Nov 03, 2018 10:01 (IST)
Yeddyurappa, who cast his vote at Shivamogga earlier today, spoke to reporters that he was confident of his son, BS Raghavendra, winning from Shivamogga, known as the bastion of the BJP.
"101 per cent my son (BS Raghavendra) is going to win the Shivamogga seat. We are also going to win Bellary and Jamkhandi. We will get an absolute majority in all the constituencies," according to news agency ANI quoting him. 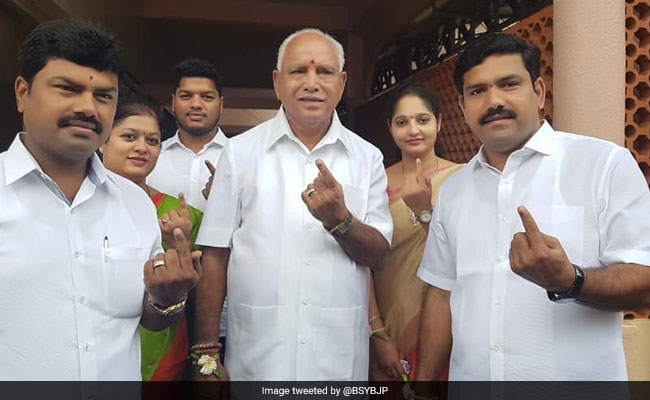 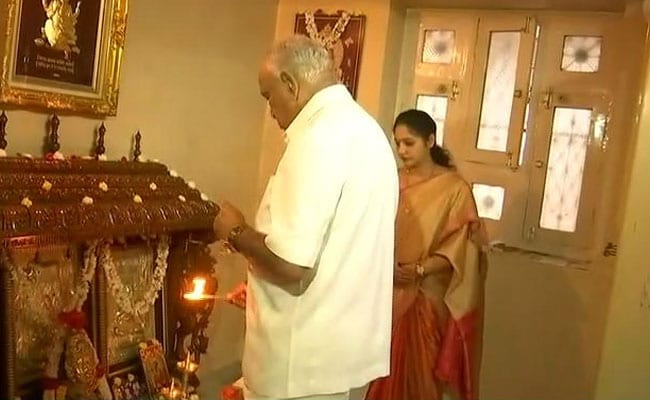 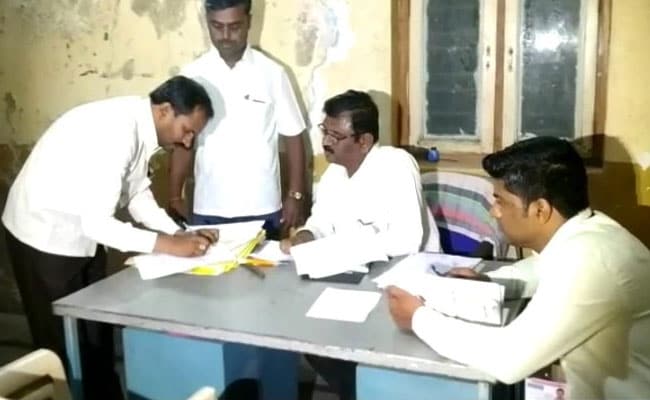 Nov 03, 2018 07:47 (IST)
Officials at Bellary as voting begins.
The seat in Ballari, reserved for Scheduled Tribes, fell vacant following the resignation of Mr Sreeramulu, who won from the Molakalmuru seat in Chitradurga district in the Assembly elections earlier this year. 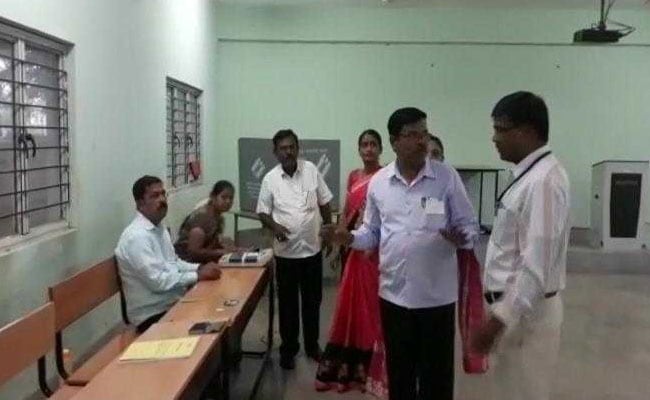 #KarnatakaByElection2018 | ANI visuals from a polling station in Bellary.

Nov 03, 2018 07:42 (IST)
Three Lok Sabha and two assembly seats will be voting today in a crucial set of by-elections in the state.
Ramanagara Assembly Polls:
Anitha Kumaraswamy, wife of Karnataka Chief Minister HD Kumaraswamy, has been given a virtual walkover as the BJP candidate L Chandrashekhar quite the party to join the Congress just two days before polling.
Shivamogga Lok Sabha Polls:
BJP has fielded Mr Yeddyurappa's son BY Raghavendra, the JDS has nominated Madhu Bangarappa, the son of former chief minister S Bangarappa. JDU fielded Mahima Patel, son of former chief minister JH Patel.
Ballari Lok Sabha Polls:
Shantha, the sister of BJP leader B Sreeramulu, is in the fray with her main opponent, VS Ugrappa of the Congress.
Mandya Lok Sabha Polls:
JDS has fielded LR Shivarame Gowda, who will be up against BJP candidate Siddaramaiah, who is said to be a newcomer.
Jamkhandi Assembly Polls:
The Congress has fielded Anand Nyamagouda, son of senior leader Siddu Nyamagouda. He is up agianst BJP's Srikant Kulkarni.
Nov 03, 2018 07:29 (IST)
Close to 6 months after the Congress-JDS alliance in Karnataka won the assembly elections in a high voltage drama battle between the BJP and JDS-Congress.
The Congress, ended up with 78 seats in the Karnataka assembly elections, had teamed up with the rival JDS, to keep the BJP out of power. The BJP, had secured 104 seats in the state assembly, going on to be the single largest party in the assembly but was away from the majority mark of 111 seats.
The bypolls today is to put to test, the Congress-JDS coalition government in the state.