Chief Minister HD Kumaraswamy and his father, HD Deve Gowda, met on Monday night to discuss the ongoing situation. Both of them have ruled out any threat to the ruling coalition. 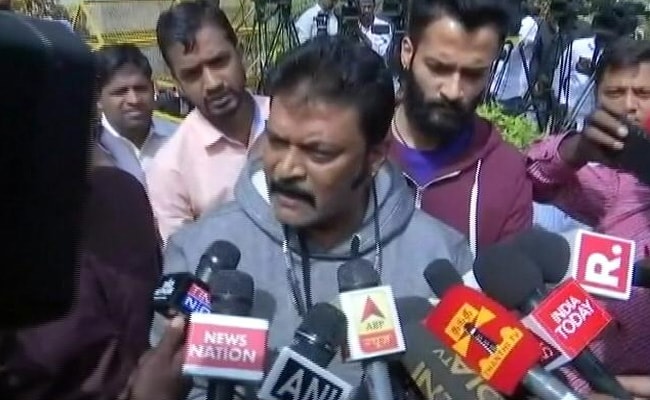 One of the "missing" Congress MLAs, Anand Singh, made an appearance in Bengaluru.

Karnataka politics, rarely short of drama, is seeing the latest chapter of back and forth between the three main parties in the state, the ruling Janata Dal (Secular), the Congress and the BJP.

It is Sankranti, an important festival in the state, but Karnataka's 104 BJP lawmakers are far from home in a luxury hotel in distant Gurgaon after a meeting in the capital on Monday. While BJP sources initially described it as a visit to the capital to attend the party's national executive meet, there was a surprise from former chief minister BS Yeddyurappa and fellow BJP leader Shobha Karandlaje. They told reporters in New Delhi that they feared their lawmakers would be poached by the JD(S).

JD(S) leader and former prime minister HD Deve Gowda, laughed off the allegations, saying his son - Chief Minister HD Kumaraswamy - was running a stable government and would do so for a full five years, despite "gossip for the past seven months".

But the father and son did meet on Monday night to discuss the ongoing situation. Both of them have ruled out any threat to the ruling coalition.

The Congress, meanwhile, is concerned about some of its lawmakers who appear to be out of contact with their party. Mr Kumaraswamy claims they are in a Mumbai hotel and in touch with him.

One of them, Anand Singh, made an appearance on Tuesday. "Nobody has contacted me from the BJP. Nobody has even called me. And I have not talked to anyone," said Mr Singh

The case of the "missing" lawmakers gave rise to the original "Operation Lotus" allegations against the BJP. The term was first used in 2008, when the BJP was accused of inciting several opposition legislators to defect to ensure the stability of its government headed by Mr Yeddyurappa.

"The anti-defection law is there. You can't do any dirty politics at this point of time...The government is stable. It will run for full five years under the leadership of CM HD Kumaraswamy." Mr Shivakumar told reporters.